Wife of Kwara United winger Lucas Alves who is a Brazilian has expressed her love for Nigerian food eba and egusi claiming that she loves taking the meal since arriving Nigeria.

Kwara United who are top Nigerian Professional League side signed Brazilian winger Lucas Alves before the start of the ongoing League season and was impressive in pre-season games.

Lucas Alves joined Kwara United few months after getting married and his wife had to travel down to Nigeria so as to be with her husband in Ilorin which is the capital of Kwara state.

The Brazilian footballer on February 14 made his debut for Kwara United in NPFL game against Dakkada in which the Harmony Boys won the tie 3-0 at the Kwara state stadium. Super Eagles legend opens gigantic mansion which has bridge as he gives top governor, other celebrities a tour of the house

Alves' wife was at the stands during that game to watch her husband in action even though he was only introduced seven minutes to the end of the game.

Before Kwara United's game against visiting Abia Warriors on Wednesday, February 24, Lucas did not make the squad, but him and his wife were in the stadium to watch the game.

Lucas' wife told Legit.ng before the kickoff of the match that she is enjoying her stay so far in Nigeria and prayed that Kwara United will excel this season.

''I have been here in Kwara state for a month already and I am grateful to those who made my trip coming down possible as I wish Kwara United best of luck this season.

''I like all Nigerian foods, but my favourite is Eba and Egusi. I love it so much.'' 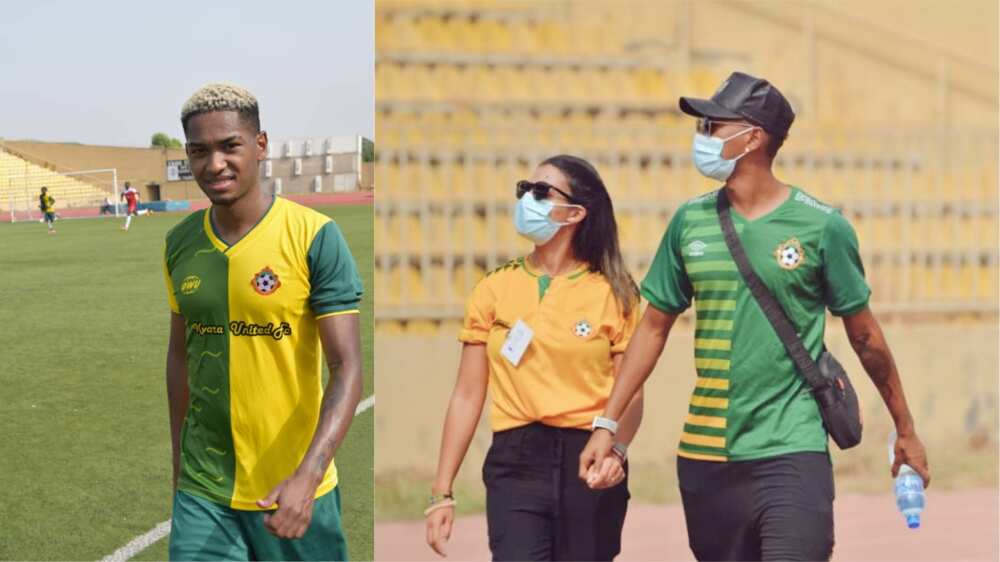 Meanwhile, Kwara United are currently occupying second position on the NPFL table and the Harmony Boys will be facing Warri Wolves in their next game. Kwara United unveiled the 25-year-old Brazilian at their Secretariat inside the stadium complex in Ilorin on Monday afternoon, October 5, after Lucas Alves agreed a one-year contract.

Lucas Alves started his football career in his country where he played for Corinthians and Pao De Acucar before moving to America.

Last year, Lucas Alves played for Seahorses Los Angeles where he was impressive before he left the side in December 2019.