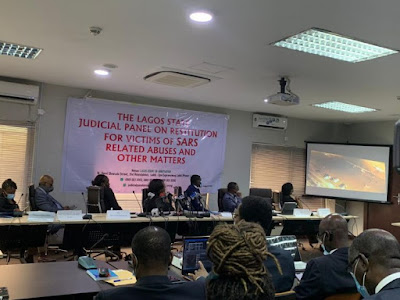 A man who claimed he lost his left leg after soldiers shot him at the Lekki Toll gate on the night of October 20, Saturday sought ₦206.5million as compensation from the Lagos State judicial panel probing the incident.

The petitioner, Lucky Philemon said the sum comprises ₦200m as damages for the inconvenience of losing his limbs, ₦1.5million for psychological evaluation, ₦5million for the cost of subsequent medical care and $50,000 for Prosthetic limbs.

Led in evidence by his lawyer, Oluwole Bamgbala, Philemon said: He was at Lekki toll gate with other #EndSARS protesters, when the military came at about 6 or 7pm and started shooting.

He said he fainted soon after being hit by the bullet and woke up later in the midst of dead people.

“We all sat on the ground; they shot me on my left leg. I slumped, when I woke up, I saw myself in the midst of dead protesters, somebody now said this one is still alive because I raised my hand.

“Then I was rescued and taken to Reddington Hospital Lekki. I was taken to the theatre where the doctor said they had to amputate my leg,” he said.

Philemon, who claimed he spent 32 days at the hospital, tendered in evidence photographs showing his physical state before and after the amputation of his leg.

He asked the panel to pay him the compensation to enable him to rebuild his life around the sad new reality foisted on him by government agents at the Lekki toll gate on the 20th of Oct.

But during cross-examination, counsel to the Lagos State government, Abiodun Owonikoko (SAN) pointed out some inconsistencies in Philemon’s testimony.

Owonikoko said: “The petitioner has a discrepancy about his state of origin; he is from Plateau State and not Kaduna State as stated in his petition.

“Philemon, who also stated that he had worked for a construction company for three days before the incident, could not produce his identity card.

“He also admitted that he was still at the Lekki toll gate plaza till about 8pm but from videos in circulation, the vicinity of the Lekki tollgate had been evacuated at about 8pm.

Contrary to the claims that he was shot at about 6-7 pm when the military came to the toll gate, Owonikoko noted that medical records showed that the petitioner was brought to Reddington Hospital at 11:30pm and he was said to have stated on arrival at the hospital that he was shot 30 minutes before his arrival.

The cross-examination was stalled when the panel realised that the medical records of the petitioner was not in evidence before the panel.

Chairman of the panel, Justice Doris Okuwobi, thereafter adjourned all cases involving victims who got treatments at various hospitals to a date to be communicated to their counsel. The panel did this so it could access the medical records from Reddington and other Hospitals.

Justice Okuwobi held: “Reddington and other Hospitals will be contacted and their medical records subpoenaed, due to this all cases connected to the hospitals will be adjourned to another day to be communicated to parties.”