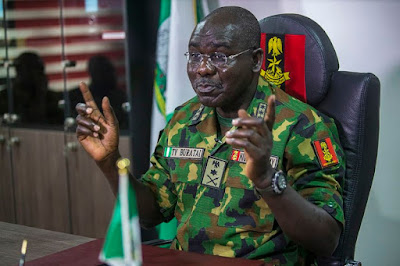 Ex-Chief of Army Staff, Lt. Gen. Tukur Buratai (retd), on Saturday, said the effort to contain insurgents by the Army under his command was not appreciated by Nigerians.

The ex-Army boss spoke in Kuta, Osun State, at an interdenominational prayer organised for him by Olowu of Kuta, Oba Adekunle Oyelude, held in the Olowu’s palace.

Represented by two of his coursemates, Major Daniel Banjo (retd) and Wing Commander Mamman Yusuf (retd.), Buratai, who spoke through Banjo, said three times he was ambushed while battling insurgents.

He then assured the community of continued relationship and support even after exiting the Army.

“At the war front, many things happened and Nigerians are not appreciative. Three times I was ambushed and jumped into the bush with my men and engaged the insurgents. My relationship with Olowu of Kuta is divine,” Buratai said.

In his remarks, Olowu of Kuta, Oba Oyelude, said the people of the community would remain grateful to Buratai for the assistance he rendered towards the completion of a bridge linking the community to Ede.

Oba Oyelude said, “For decades, several prominent political officeholders have tried to help us construct Ede/Kuta Bridge, but they could not, but on bringing the request before Lt. General Buratai, he granted it and ensure it was built.

“This is enough achievement for me as a monarch. The bridge is almost a hundred years and now the communities in this area have been linked and the villagers are now liberated.

“My support for the army was borne out of the fact that Buratai is a detribalised Nigerian and the most humane to serve as Army boss. The nation can only enjoy peace if we support the army to succeed in its quest to battle insecurity irrespective of who is in control.”

Prayers were offered for the ex-Army boss by Muslim and Christian clerics at the event attended by dignitaries from within and outside Osun State.