Osun Government frowns at illegal use of official number plates 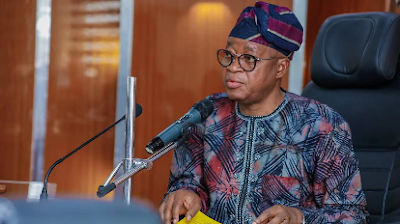 The Osun State Governor, Mr. Adegboyega Oyetola, has frowned at the illegal use of official Osun State Government number plates, stressing that henceforth, anybody caught would be made to face the full wrath of the law.

While describing its effects in the face of security challenges currently facing the entire country as damning, the governor also directed the Governor’s Monitoring Team (GMT) to commence thorough security checks of any vehicle marked with the Osun State Government official number plates to ascertain the genuineness or otherwise of the issuing authority and its users.

The governor’s directive was contained in a press statement signed by the Secretary to the State Government, Prince Oluwole Oyebamiji.

According to the governor, any vehicle found or caught with Osun State Government Official number plates without a duly authorized letter issued by the accounting officer of the corresponding Ministry, Department and Agency of the state government would not only be seized but appropriate sanctions would be applied forthwith.

The Statement reads, “the attention of the Osun State Government has been drawn to the increasing usage of Osun State Official number plates by unauthorised person(s) within and outside Osun State.”

The governor observed that the development is illegal and criminal in nature as the users were doing so with the sinister motive of carrying out their unlawful activities to escape security checks.

The release, therefore, enjoined all accounting officers in all Ministries, Departments and Agencies of the state government including the legislative and judicial arms of government , local government areas and all tertiary institutions in the state to take necessary action in getting this illegal act curbed with immediate effect.