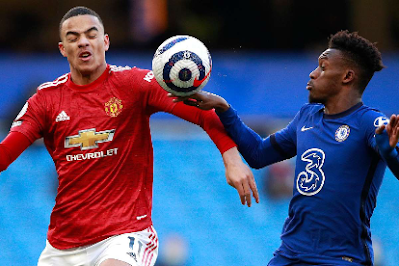 The English Premier League has issued a statement to explain the decision not to award Manchester United a penalty in Sunday’s clash against Chelsea at the Stamford Bridge.

In the first half of the clash between Chelsea and Man United, Marcus Rashford’s free-kick was blocked by Edouard Mendy, and the ball appeared to strike the arm of Callum Hudson-Odoi on a number of occasions.

While the ball also appeared to hit the arm of Man United striker, Mason Greenwood, which occurred after the contact from Hudson-Odoi.

Referee Stuart Atwell was called over to watch the incident on the pitch-side monitor following a VAR review, but he decided not to award a penalty.

However, the Premier League has now issued a statement on the matter, which read: “The VAR asked the referee to look at the incident again, but he stuck to his on-field decision as he felt that Hudson-Odoi didn’t move his hand towards the ball.”

The draw means Chelsea are still in the fifth position on the log, while Man United are in the second position with 12 points behind leaders Manchester City.

Meanwhile, a former Premier League referee, Mark Clattenburg, has said that he was baffled as to how referee Stuart Attwell did not award Manchester United a penalty against Chelsea.

He said, “I am amazed Manchester United were not awarded a penalty in the first half for the clear handball by Callum Hudson-Odoi.

“How Attwell did not then point to the spot, having been shown the same angles that we were, is a mystery.”