- A woman has got social media talking with her achievement as she recently graduated with a first class in law from the University of Wolverhampton, United Kingdom

- While many congratulated Asiyah, others doubted the email because it was poorly written

A woman identified as Asiyah Randera has celebrated her achievement after graduating with a first class in law from the University of Wolverhampton, United Kingdom.

In a LinkedIn post, the woman shared a screenshot of the message she received from the chair of the exam board.

She captured the screenshot:

"I am thrilled and lost for words after receiving this email on Friday."

In the message that was sent to Asiyah, the chair disclosed that the school has never seen a student scoring over 70 every year and neither has she seen such in her 30 years of teaching. 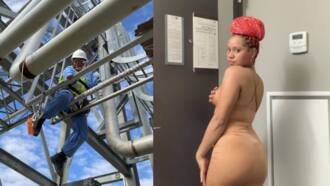 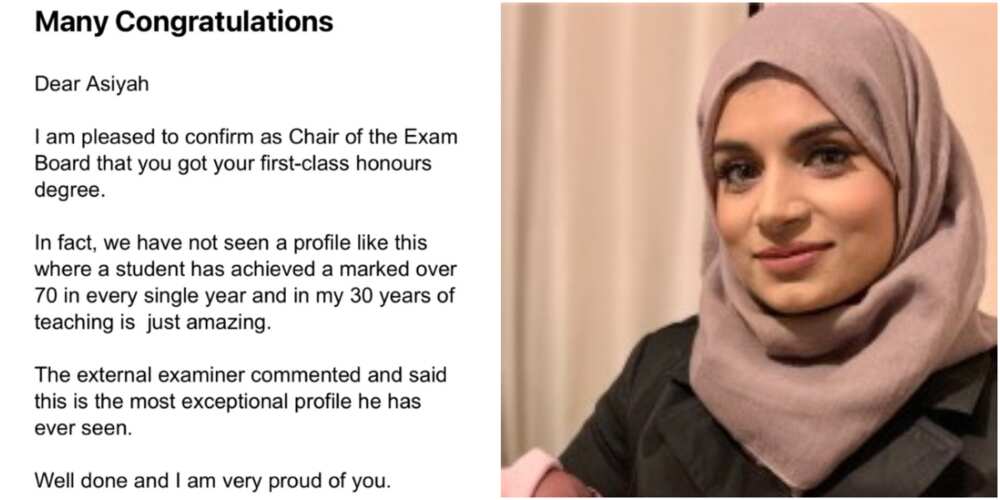 LinkedIn users were impressed with Asiyah's feat and flooded the comment section of her post with congratulatory messages.

Some, however, doubted the veracity of the screenshot due to the fact that it was poorly written.

"Congratulations my girl!! I’ve witnessed you work so hard you really deserve this."

"Have you clicked on the properties of the sender to confirm it has come from the university Whilst I’m not condoning your success, this is very poorly written.

"If this is genuine, then I would be contacting them to show them the poor representation of the institution that has been sent out!

"Please don’t criticise me - I’ve worked in customer service for over 34 years so I know the quality of messages that would be expected."

The school took to the comment section to corroborate Asiyah's claim. It wrote: Proud mum of 4 kids mocked as a 'baby making machine' gets award for best thesis in Nigeria, many react

"We would like to confirm that this informal email is a genuine message from Asiyah's academic team congratulating her and passing on positive feedback from the external examiner.

"We felt she should know how impressive her work was and were delighted that, in these difficult times, we had some good news to share. We are proud of all of our students' achievements and wish Asiyah and all of her classmates all the very best in their future careers."

In a similar news, a Nigerian lady identified as Oreoluwa Olomodosi has taken to social media to celebrate her win after graduating with first-class honours in Economics and Finance from the University of York, England.

Sharing her achievement on LinkedIn, Olomodosi said she had a wonderful time studying, volunteering and taking up leadership roles in societies and in her department. 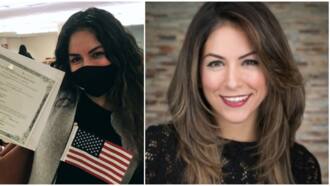 She expressed gratitude to God, her family, friends and mentors that helped her throughout her academic journey.