A Nigerian artist with the Twitter handle @Zilaflexa has gathered much attention on social media after he showcased the pen art of Davido that he did.

The young artist said that he is a self-taught illustrator, adding that the art of the singer was his first for the year 2021.

@Zilaflexa asked people to retweet his work across their timelines so that it can come to the Holy Ground crooner's attention.

One of the amazing things he achieved with the drawing was Davido's dimple which he highlighted with a shadow.

His tweet has over 20,000 likes with about 7,000 retweets as at the time of writing this report. Legit.ng compiled some of the reactions below: "This is too beautiful!" 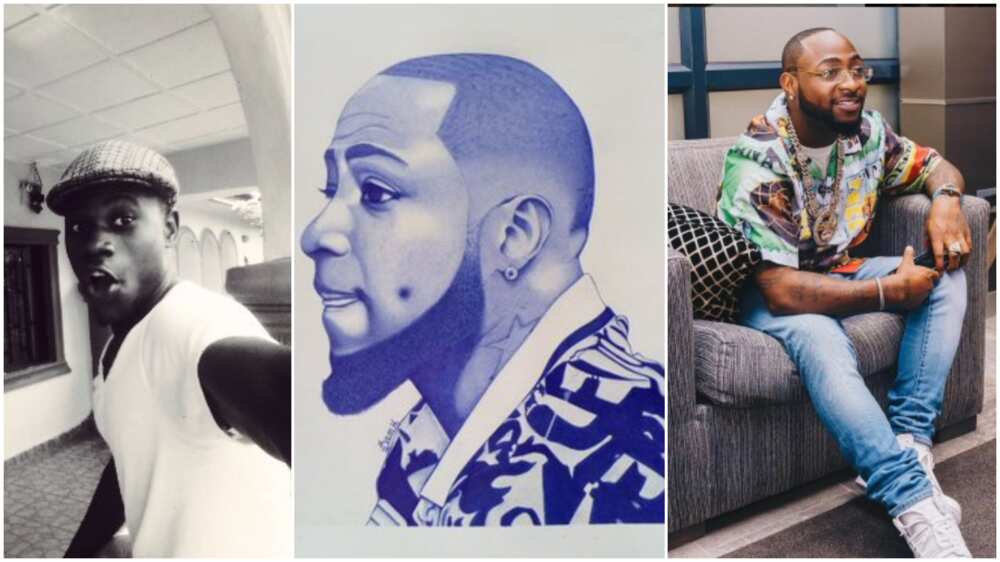 Many people have praised the artist for the brilliance he deployed into the art. Photo source: @Zilaflexa
Source: Twitter

"Guy apart from being an artist are you also a Barber?"

"The sketch fine pass the real person. You are fantastic."

"It's the dimples for me. Beautiful work."

Meanwhile, Legit.ng earlier reported that another talented young Nigerian fine artist, Fredrick Omoniyi, has drawn Davido's A Better Time album cover and it looks exactly the same as the real one.

In a post on Wednesday, January 20, the man said that recreating the FEM crooner's tattoo was another great art for him.

After posting his own recreation on Twitter, Fredrick also maintained a high hope that the musician sees what he has done.

Joseph Omotayo writes for the human interest desk at Legit.ng. He graduated from Obafemi Awolowo University with a degree in Literature in English. He loves basketball and books. He tweets @omotayome.