- The deputy governor of Edo, Philip Shaibu, has urged the residents of the state to join hands with the government in protecting their lives and property

- According to him, bringing up the issue of minimum wage now would be rejected

Philip Shaibu, the deputy governor of Edo state, has kicked against a bill seeking to switch minimum wage from the exclusive legislative list to the concurrent list.

Premium Times reports that Shaibu, in an interview with the News Agency of Nigeria (NAN) on Thursday, March 4, in Benin, advised the sponsor of the bill to step it down.

Legit.ng gathered that he advised the lawmaker to move motions and sponsor bills that would support programmes geared toward finding lasting solutions to the problems of insecurity in the country. 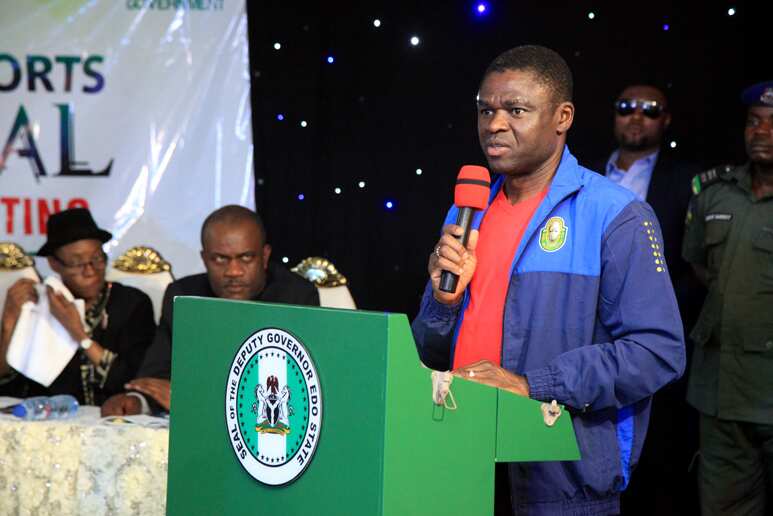 The deputy governor of Edo state has kicked against the minimum wage bill sponsored by a member of the state House of Assembly. Credit: @HonPhilipShaibu
Source: Twitter

“Let us all discuss the issue of insecurity and make our cities, communities, and our country secure.”

Shaibu also stated the need for lawmakers to legislate on issues that would unite the country rather than those that would further divide it and bring about chaos, adding that the time to bring up issues as contained in the bill is not now.

The deputy governor urged the National Assembly to concern itself with the issue of insecurity, stressing that the issue of the economy is all about security because “no investor will come to your land if he is not sure of the safety of his investment.”

Meanwhile, Legit.ng had previously reported that following the failure of some state governors to start the payment of the new N30,000 minimum wage, the Nigeria Labour Congress (NLC) instructed its members to embark on immediate industrial action.

It was reported that the NLC disclosed this on Thursday, February 18, in a statement signed by its national president, Comrade Ayuba Wabba and its general secretary, Comrade Emmanuel Ughoaja at the end of its National Executive Council (NEC) meeting.

The NEC of the NLC called the refusal of state governments to pay the new national minimum wage as an “act of criminality, betrayal of the oath of office sworn by state chief executives.