The Chief of Defense Staff, General Lucky Irabor has assured that the Nigerian Armed Forces would not allow terrorists to determine the peac... 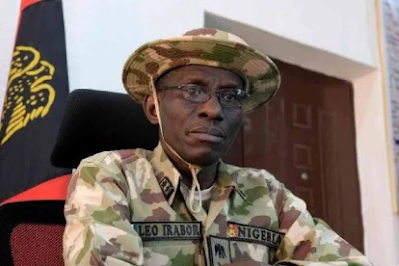 The Chief of Defense Staff, General Lucky Irabor has assured that the Nigerian Armed Forces would not allow terrorists to determine the peace of the country.

Irabor spoke while addressing State House Correspondents after President Muhammadu Buhari decorated him and other Service Chiefs with their new ranks.

He assured that the Nigerian Armed Forces will determine the country’s peace.

He said, “Peace and security is not just the security of the borders alone. It comes with having to build bridges across various divides.

“We as members of the Armed Forces will never in any way leave the peace and security of our nation in the hands of the terrorists.

“Rather it is us who will determine the peace and not for us to leave it in the hands of the terrorists.”

The Senate had recently confirmed Irabor and other Service Chiefs following Buhari’s nomination.

Following their confirmation, bandits have been on the prowl, abducting students from some Northern schools.

States like Zamfara, Niger and Katsina have been hit by these bandits.