President Muhammadu Buhari, on Friday, decorated the new service chiefs at the council chambers of the presidential villa, Abuja. He t... 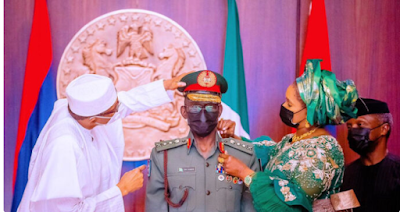 President Muhammadu Buhari, on Friday, decorated the new service chiefs at the council chambers of the presidential villa, Abuja.

He told the service chiefs they have a “short time” to deliver.

Lucky Irabor, chief of defence staff, is now a full-star general. He was a lieutenant-general.

Ibrahim Attahiru, chief of army staff, was decorated with the rank of lieutenant-general after his promotion from major general.

Awwal Gambo, chief of naval staff, is now a vice admiral, up from rear admiral.

Isiaka Amao, chief of air staff, was decorated with the rank of air marshal, a step above air vice marshal.

Promoting newly appointed service chiefs has become a tradition since Nigeria transited to democracy in 1999.

Buhari announced the appointment of the new service chiefs in January.

Following their screening by the senate, they were confirmed on Tuesday.

Aliyu Wamakko, chairman of the joint committees on army, navy and air force, who presented a report for the consideration of the senate during the screening, had said the service chiefs met the requirements expected of them.

The chairman said no petition was received against the nominations.

“Their nominations are in line with the constitution. The committee did not receive any petition against them. That they are experienced public servants,” he had said.

The ceremony was witnessed by Vice-President Yemi Osinbajo; Boss Mustapha, secretary to the government of the federation (SGF); Bashir Magashi, defense minister, and Ibrahim Gambari, chief of staff to the president.

The new service chiefs were also accompanied to the ceremony by their wives and some other senior officers of the Nigerian armed forces.