- The highly impressive manager is worried about the forthcoming international break

Manchester City manager Pep Guardiola has stated that a certain number of players will not be allowed to go on international duty later this month.

International break looms as players are billed to return to their respective national teams to participate in competitions for their home country.

Guardiola who has now joined the likes of Chelsea boss Thomas Tuchel says they will not allow players travel home if they would need to quarantine upon return to the UK.

Coronavirus protocols in the UK means that players would immediately embark on a 10-day quarantine when they return, which will consequently see them miss a few games. “It makes no sense if they have to isolate for 10 days. We’ve worked for eight or nine months, and if eight or nine players cannot play, they're not going to fly.

“If they can come straight back to training, they’ll fly. We invest a lot of time and money, so if they cannot play with us it makes no sense.

“But there's no sense to do it and not play for 10 days when we're playing for the Premier League, the Champions League and we can’t play with these players. They're not going to fly." The manager also raised concerns about the threat posed by the Red Devils as he singled out the striker from Ole Gunnar Solskjaer’s attack ahead of the showdown. 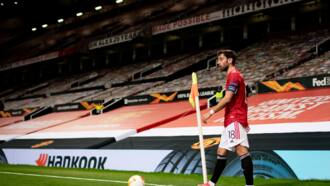 Guardiola praised Cavani for his blistering career in the game of football while giving a hint of what should be expected when both teams lock horns at the Etihad Stadium.

The 24-year-old has so far played more minutes than any player under Pep Guardiola during this campaign despite also attending classes.

It was gathered that the key for Rodri has always been education, but he has also made time to focus on his footballing career.