Four bandits and a soldier died when troops of Operation Hadarin Daji clashed with criminal elements on Thursday in Marina village, Safana... 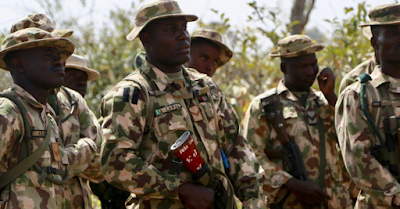 The Director Army Public Relations, Mohammed Yerima, disclosed this in a statement on Saturday, titled, ‘Re: Many Soldiers Feared Killed As Bandits Storm Military Base In Katsina’.

According to the Army spokesman, media reports that an “unspecified number of soldiers were feared killed in attack on a military post in Marina” were “false and unsubstantiated”.

The statement partly read, “To set the record straight, troops of Operation Hadarin Daji while conducting clearance operation against armed bandits and other criminal elements on 4 Match 2021, engaged and successfully neutralized 4 armed bandits, captured arms and motorcycle during an encounter with the armed bandits in Marina village in Safana LGA of Katsina State.

“The unconfirmed number of armed men with unspecified number of rustled cattle were sighted and intercepted along Batsari-Runka road. However, in an attempt to escape from the troops onslaught, the bandits sporadically fired at troops direction but the gallant troops responded with superior firepower followed by a hot pursuit thereby forcing the bandits to withdraw in disarray.

“During the encounter, four armed bandits were neutralized while others escaped with various degrees of gunshot wounds. The troops also captured two AK-47 rifles and one motorcycle belonging to the bandits.

“Regrettably, one brave soldier paid the supreme sacrifice during the encounter. Troops have dominated the general area and are trailing the escaping bandits.”

Yerima said the Army authorities commended the gallant troops for the successes achieved and their commitment so far.

“They are further urged not to rest on their oars until the North-West zone is rid of all criminal activities,” he added, assuring the people of the region of the troops’ commitment to the safety of lives and properties within the zone.