Cristiano Ronaldo and Aaron Ramsey could be on their way out at Juventus, as the club prepares for a rebuild this summer, according to Fabri... 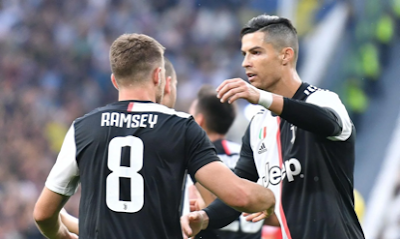 Cristiano Ronaldo and Aaron Ramsey could be on their way out at Juventus, as the club prepares for a rebuild this summer, according to Fabrizio Romano.

The Serie A giants are set to hold talks with Ronaldo over his future.

Juve will now look to build around Federico Chiesa, Weston McKennie and Matthijs de Ligt as they move into a new era.

Ronaldo, 36, was signed from Real Madrid to help the Serie A champions win the Champions League. He is in his third season at the club and he is still yet to win it.

The Portugal captain has another year on his contract and the club’s director, Fabio Paratici, is not ruling out an extension, but says there is no rush to sort it out any time soon.

“Cristiano’s contract renewal is not an immediate issue on the agenda, there’s time to talk about it.”