Nnamdi Kanu, leader of the proscribed Indigenous People Of Biafra, IPOB, has said it is not the duty of the Federal Government to decide who... 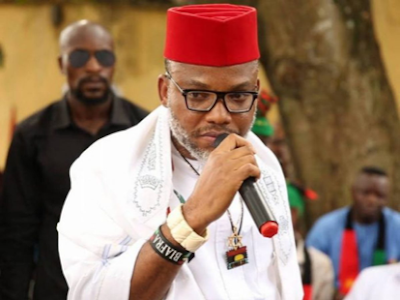 Nnamdi Kanu, leader of the proscribed Indigenous People Of Biafra, IPOB, has said it is not the duty of the Federal Government to decide who stays or leave Nigeria.

According to him, the decision of whether the country would disintegrate or remain integrated should be determined by the people via a referendum.

The founder of the Eastern Security Network, ESN, said not even the military has such power.

It’s not your business to decide whether the people of your State should remain Nigerians or not. It’s not even the business of @NGRPresident or the @HQNigerianArmy.

“Instead, it’s the business of the PEOPLE, freely expressed through a process called REFERENDUM”, the tweet reads.

Recall that the Chief of Army Staff (COAS), Lt. -Gen. Ibrahim Attahiru recently said the military was ready to deal with all separatists disturbing the cooperate existence of Nigeria.

He vowed to ensure that those inciting disintegration such as the Yoruba activist, Sunday Igboho who recently declared the Oduduwa Republic and his South South counterpart, ex-militant, Asari Dokubo are all dealt with.