Bauchi governor: Jonathan made me FCT minister despite not being in same party

Bala Mohammed, Bauchi governor, has praised Goodluck Jonathan for making him a minister in 2010 despite not belonging to the same party.  ... 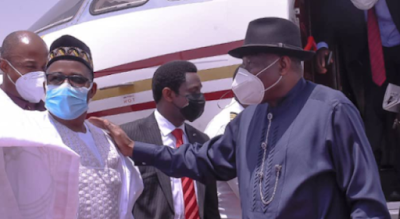 Bala Mohammed, Bauchi governor, has praised Goodluck Jonathan for making him a minister in 2010 despite not belonging to the same party.

Jonathan, the incumbent president at the time, was a member of the Peoples Democratic Party (PDP) while Mohammed belonged to the All Nigeria People’s Party (ANPP).

Mohammed spoke on Tuesday about his relationship with Jonathan when the former president visited Bauchi to commission some projects.

The Bauchi governor said Jonathan was “instrumental to my coming into the limelight in Nigeria”.

“Somebody that I never had anything in common with other than the traits of nationalism and Nigerianness. He made me the Minister of the FCT without knowing me or belonging to the same party with me,” Mohammed said.

He also praised Jonathan for not “creating issues” after losing the 2015 presidential election.

Jonathan was also conferred with a traditional title by the emir of Bauchi while a road was named after him.

The former president noted that the administration of Bala Mohammed is executing “people-oriented projects” in the state.

He said: “I am grateful to the Government and the good people of Bauchi State for naming the Sabon Kaura to Miri Road after me.

“I thank the Emir of Bauchi Dr. Rilwanu Suleiman Adamu and members of Bauchi Emirates Council for the warm reception and for conferring on me the title of Jigon Bauchi during the visit.”

The former president noted that the administration of Bala Mohammed is executing “people-oriented projects” in the state.