- Pastor Henry explained that Okocha should not have accepted such deal

Popular Nigerian clergyman Rev. Patrick-Grace Henry of the Grace Family Outreach has slammed football legend Jay Jay Okocha for his decision to be using his image to promote betting company.

There is no doubt about the fact that Okocha was one of the best amazing midfielders during his active playing time considering his records in the Super Eagles and all the clubs he played for.

While ministering to his congregation, Pastor Henry testified to the fact that Okocha used to bring joy to the hearts of many people on the pitch with his styles of play.

He added that Okocha was one of the best players in the world that all Nigerians would love to watch live or on the television. However, he frowned at the 47-year-old Super Eagles legend being the face of a betting company claiming that Okocha is a disgrace to the his generation.

According to the video shared by Planet FM Uyo, Pastor Henry was seen expressing his anger towards the Super Eagles legend.

''Any day I see Okocha, I will tell him that he is a disgrace to this generation because he was the first footballer who played soccer for people to enjoy.

''Okocha never bet his way to football, but shame onto him for becoming the face of a betting company despite how he made his name.

''How can someone like Okocha be promoting betting with his image? it is a shame and I want him to know that he is a disgrace.''

During his time in the Super Eagles, Okocha played 73 games for Nigeria and he scored 14 goals before he retired from international football. 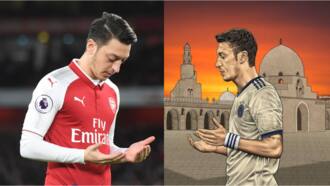 Earlier, Legit.ng reported how Vincent Enyeama was asked to select his fantasy 5-a-side team comprising African players that played in the French League.

The former Super Eagles shot-stopper is regarded as one of the best African goalkeepers that played in Ligue 1.

The 38-year-old was given the privilege to pick his own team while conducting an interview with Ligue 1's Twitter handle.

Ordinarily one would expect Enyeama to select his former teammates Jay Jay Okocha and John Utaka who had glittering careers in the French topflight division.

But the interviewer restricted the Nigerian from selecting another of his compatriot because he is already on the list as the goalkeeper.