Popular Links: Buhari Football EFCC Boko Haram Trending Nigerian Names Politics
Home | News | General | Nigerian man who graduated with 3rd class from OAU becomes genius in Canada, tops his class
It came to me in the middle of the night - Nigerian artiste reveals why he makes sculptures with screws
Young Nigerian woman who paints cars reveals challenges she faced from men on her way to success

- According to the young man identified as Ray Reddington, he was advised by his lecturers in Canada to take the IQ test after they saw his method of solving problems

- Reddington said he also topped his class in the foreign country, adding that nobody would have known that he was a genius

A Nigerian man identified as Ray Reddington has taken to social media to disclose that he graduated with a third class from the Obafemi Awolowo University (OAU) but became a genius in Canada. 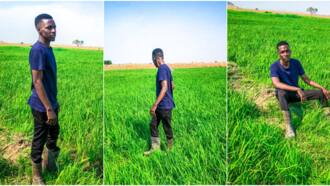 The young man said his lecturers in Canada urged him to take an IQ test after they saw his methods of solving problems.

According to Ray, his test results showed that he is smarter than 99% of people around the world.

"In OAU I graduated with a 3rd class, In Canada my lecturers urged me to take an IQ test after they saw my methods in solving sh*t.

"Turns out I'm a genius. By my test results I'm smarter that 99% of the world and yes I topped my class.

"Who would have known."

Reacting to the post, a tweep with the handle @o_phuntor wrote:

Nigerian man finds fulfilment as he resumes teaching job at a school he finished from, many react

"The thing is that, there are a lot of genius like you in OAU and not many in Canada..Oga Nigerians are brilliant compared to other countries."

"If he schooled in Canada he would be on the same level as them. U guys don't understand that Nigeria universities has a way of drilling a lot into you. The guy said the teacher was surprised by the method he used let's not forget he learnt them in OAU. so thanks to OAU."

In other news, a Nigerian man with the Twitter handle @MikeMicheal_ has taken to the social media platform to celebrate his win after getting a scholarship for his PhD in inorganic chemistry.

The young man simply identified as Mike said he got the offer with his 4.49 CGPA. He would be doing his PhD with his first degree.