Nigerian artist paints beautiful portrait of Don Jazzy, wants to meet him and touch his garment, many react

- The adorable portrait has received a lot of positive reactions from tweeps who tagged Don Jazzy, liked, commented and retweeted

A young Nigerian visual artist has painted an adorable portrait of music producer Don Jazzy which he shared on social media.

The young man with the Twitter handle @Seyi_Eraser urged tweeps to help him tag the entertainment guru so he could see the masterpiece. 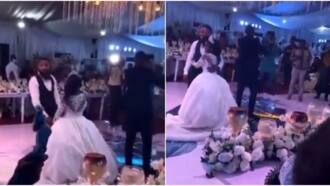 He said he would like to meet Don Jazzy and touch the helm of his garment.

"In the spirit of ramadan, I'm shooting my shot @DONJAZZY with this little portrait cos I really want to meet @DONJAZZY and touch the helm of his garment, lol, so you guys should help me RT and tag him cos we need to see and he has to pour some of that magic dust in my life."

"@DONJAZZY this right here is beautiful."

"That art is spectacular @DONJAZZY."

In other news, a Nigerian man identified as Segun Akano is the only artist in the country that makes sculptures with screws. 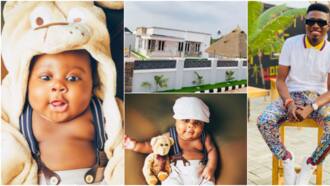 Speaking with Legit TV, he said he decided to make sculpture with screws because he wanted to be identified with something unique.

According to Akano, the idea came to him in the middle of the night and he immediately acted on it.

Akano later found out that artists in other countries were also executing the idea.