Governor Oluwarotimi Akeredolu of Ondo State on Wednesday vowed to embarrass his former Deputy, Agboola Ajayi, over his continued failure to... 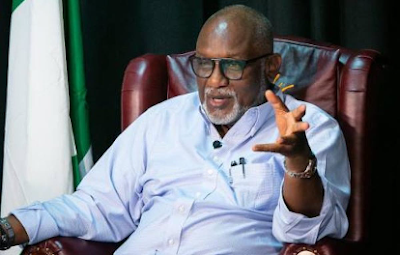 Governor Oluwarotimi Akeredolu of Ondo State on Wednesday vowed to embarrass his former Deputy, Agboola Ajayi, over his continued failure to return the official government vehicle in his custody.

Akeredolu emphasized that he will not hesitate to take lawful action against his erstwhile deputy and other ex-political appointees who kept government properties in their possession despite leaving office.

The governor had on Tuesday in Ondo petitioned the Commissioner of Police in the state, Bolaji Salami over the development

In the petition written by Akeredolu through his Senior Special Assistant on Special Duties and Strategy, Doyin Odebowale, he urged the police to prevail on Ajayi to return four vehicles in his possession which he used during his tenure as deputy governor.

While fuming that it was reprehensible for Nigerians to condone the practice by elected officials or political appointees to take government properties away when leaving office, Akeredolu who spoke through Odebowale maintained that he would unleash security agencies on former political appointees including his erstwhile deputy.

“He has no right to steal if we want to use the proper name. Why does the former Deputy Governor think he merits those vehicles and others do not. Those vehicles are public property. We have to stop this impunity. It is not only the Deputy Governor alone but all other political appointees. This madness must stop.”

The governor said all would be done to ensure that they return the vehicles, stressing that the government cannot afford to use taxpayers money to buy new sets of vehicles.

“He (Agboola) no longer enjoys immunity and we will press charges against him. He must return the vehicles. Are we now going to buy vehicles for the new Deputy Governor?”

Speaking on the development, Ajayi disclosed that since the police had been notified by the state government, he would be awaiting the response of the police on the issue.

Meanwhile, the Commissioner of Police in the state who confirmed receipt of the petition through the command’s spokesman, Tee-Leo Ikoro, said investigations into the petition by the state government had been ordered.