A video of a man with disability and his wife dancing ecstatically during the dedication of their newborn baby at a Delta church has surfa... 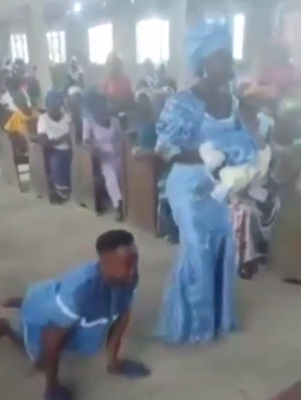 A video of a man with disability and his wife dancing ecstatically during the dedication of their newborn baby at a Delta church has surfaced online and gone viral.

The less than three-minute footage shows the couple clad in blue attires gradually making their way through the congregation to the altar.

In the heartwarming video, the man’s wife is seen carrying their bundle of joy while the man was crawling as they headed towards the altar where a clergyman was waiting to receive them.

On getting to the altar, the elated couple awed members of the church with the wife showing off her beautiful steps in an ostensible appreciation to God for gifting them the child.

The man, though unable to walk, could also not hide his joy as he was seen moving his body to the beautiful rendition from the church’s choir.

The celebration got intense shortly after as the couple started dancing with more vigour, prompting the man’s wife to drop the baby at the altar and joined her husband.

Other members of the congregation also joined them in the celebration with some of them seen spraying money on the man as he continued dancing.

The video has since continued to ignite reactions on social media with many Nigerians celebrating the couple.