Nigerian soldiers have foiled attacks targeted at it and some Muslim faithful during the breaking of Ramadan fast in Borno State. The terror... 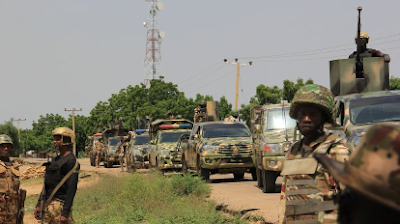 Nigerian soldiers have foiled attacks targeted at it and some Muslim faithful during the breaking of Ramadan fast in Borno State.

One of the groups hit a military Super Camp, the second attacked another position along the Maiduguri road, while the third infiltrated through the northern axis.

The Nigerian Air Force (NAF) deployed a jet to support ground troops during the invasion.

Two-gun trucks and scores of terrorists were destroyed and killed. Just before the latest strike, the terrorists met at Garin Wanzam, where they strategized.

The military believes the attacks were a tactic to distract the Air Task Force aggressor with night capability. The aircraft conducts regular air raids.

Meanwhile, a terrorist group has released a propaganda video of the April 11 attack on Damasak. Two soldiers and at least two civilians were killed.

The military killed some insurgents on gun trucks. Others were eliminated near the fence of an aid agency’s storage as they attempted to loot food items.