- Real stunned the Reds 3-1 in the first leg of their encounter played in Spain, with the result proving crucial in their journey to Istanbul

Real eliminated Liverpool in the quarter-finals stage to book a date with the Blues in the last four.

The La Liga giants secured their place after stunning Liverpool 3-1 on aggregate in the two-legged affair.

The two sides settled for a barren draw in the second leg meeting played at Anfield, with the Reds failing to overturn Madrid's 3-1 goal advantage from the reverse tie staged at Angelo Di Stefano Stadium earlier last week. 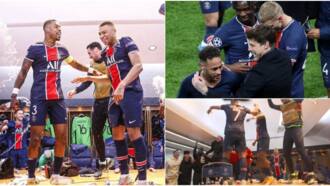 Liverpool went into the Wednesday, April 14, clash off an impressive win in the Premier League against Aston Villa at the weekend.

However, they failed to build on the momentum when they took on Zinedine Zidane's men, settling for a disappointing draw instead.

The Merseysiders had numerous goalscoring chances especially in the first half but could not make any of them count as the visitors did enough to contain them.

Diogo Jota had a half-chance to put Liverpool ahead moments after coming on in the second half but he was poor in decision making and eventually fluffed the chance.

Neither side was able to find the back of the net after full-time, with Real storming to the semis at the expense of Jürgen Klopp's men.

In the other quarter-final fixture, Man City got the better of Borussia Dortmund, with the EPL leaders sinking the German side at Westfalenstadion to progress. 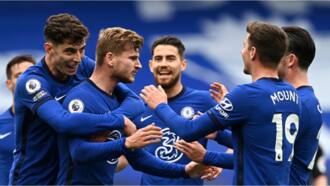 City will now face off against Paris Saint-Germain who eliminated holders Bayern Munich for a chance to reach the finals for the first time in their history.

Meanwhile, Legit.ng earlier reported that Arsenal have confirmed Bukayo Saka and Emile Smith Rowe will be available for selection when they battle Slavia Prague in the second leg of their Europa League tie on Thursday, April 15.

The encouraging news came at a time the Gunners are grappling with a number of injury concerns ahead of their trip to the Czech Republic.