- The death of a former military governor, Ahmed Usman, has thrown Kogi state into mourning

- The actual cause of Usman's death was not disclosed

A former military governor of Oyo and Ondo state, Ahmed Usman, has reportedly died of an undisclosed illness.

The Nation newspaper reported that the retired colonel died around 3am on Wednesday, April 14, in Jos, the Plateau state capital.

The publication stated that the body of the former governor was taken for burial in his village at Okura-Lafia, in Kogi state.

The Tribune also confirmed the death of Usman from a member of his family.

One of the nephews of the late ex-military governor said:

“Oga is gone. We lost him this morning.”

The late Usman was appointed governor of Ondo State in September 1994.

While governor of Ondo State, Usman installed Oba Adeleye Orisagbemi as the Attah of Ayede Ekiti.

He governed Oyo from August 1996 to August 1998 during the military regime of General Sani Abacha.

In other news, efforts to tackle the rising cases of insecurity in the country have taken a new dimension. This follows the new step of the Nigerian Army in recruiting retired officers.

According to the chief of army staff, Lt.-Gen. Ibrahim Attahiru, the veterans have crucial roles to play in tackling the insecurity facing the country, The Nation reported.

He disclosed this on Tuesday, April 13, while opening the First Quarter 2021 Veterans Affairs Directorate Workshop in Port Harcourt.

Meanwhile, Governor Dave Umahi of Ebonyi has stated that the recent attacks in the southeast were the handiwork of people outside the region. 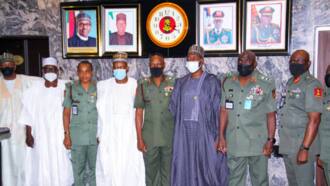 Umahi who is also the chairman of the southeast governors' forum, said those planning the attacks want to incite Igbos into war.

He made the comments on Wednesday, April 14 while appearing on a breakfast show on Channels Television.

In another news, Lauretta Onochie, a presidential media, has raised crucial concerns over the whereabouts of some suspected members of the Indigenous People of Biafra (IPOB) who attacked police officers and facilities in the southeast on Sunday, March 28.

Onochie said she is a fan of Nigerian security and justice institutions. The media aide stated that Nigerians hear a lot about the arrest of terrorists and bandits by the police but do not get to see the criminals prosecuted.