- 2baba recently travelled outside the country to visit his kids

A video of veteran singer 2baba with three of his kids has emerged on social media.

The video, which was shared by one of the singer's baby mama Pero, showed him posing with his kids for photos. Pero has three lovely kids for the singer.

2baba seemed to have travelled outside the country to pay his kids a visit. Before he waved them goodbye, he decided to take a photo and his baby mama was behind the camera. 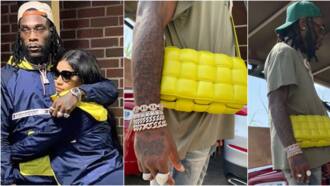 It's for Stefflon Don: Reactions as Burna Boy steps out with a female bag

The singer stood behind his adorable kids who look so much like him. Someone seemed to have said something funny as they all burst into laughter.

As expected, the video got some reactions from Pero's followers as many gushed about how beautiful the family looks.

"Daddy be looking like elder brother lol. God bless y'all."

"Mami what a beautiful family."

In other news, Legit.ng earlier reported that singer 2baba helped Annie Idibia to hold her shoes at the Headies award.

A photo of the celebrity smiling at each other had surfaced online. 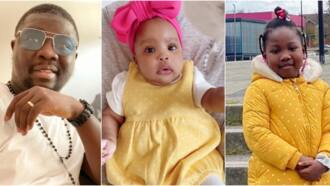 Shortly after, a video - presumably after the show - was shared on Annie's page and in the clip, the couple was seen walking down a lobby with 2baba holding his wife's shoes.

The video which has since gone viral had several internet users gushing over the couple.

"My husband be ready for this job o. I can't even wear flat covered shoe for more than 1hr, I go just dey find slippers up and down. Na WA. Small Yanga sef I can't do."