- Pastor Enoch Adeboye has expressed deep pain over the kidnap of traditional heads in Nigeria, especially in the southwest region

- Adeboye made this known when he visited the governor of Ekiti, Kayode Fayemi, on Saturday, April 17

- Although he assured the governor that he and other clerics will be praying for the state, the pastor revealed that the trend is very disheartening to him

The recent attacks on and even abduction of traditional rulers in Nigeria have forced Pastor Enoch Adeboye of the Redeemed Christian Church of God (RCCG) to make some pronouncement on the nation's insecurity menace.

Adeboye, during his visit to Governor Kayode Fayemi of Ekiti on Saturday, April 17, said it is sad and disheartening that criminals do not have regard for traditional institutions anymore, Channels TV reports.

The renowned Christian cleric admitted that the country is now in a war it cannot win by ammunition and human wisdom.

He, therefore, assured the governor of his constant prayers both for the state and the country.

“We are praying for this state because we are concerned that even the institution of Obaship is no longer considered sacred by these bandits. For a Yoruba boy like myself, that is heart-rendering.

“And I can assure you that we are crying to the Lord of Hosts, the one who has never lost a war, that he will fight this battle for us and give us victory very soon."

Earlier, there was a palpable tension in the Oye local government area of Ekiti over the abduction of the Obadu of Ilemeso-Ekiti, Oba David Oyewumi.

The Elewu of Ewu, in Ilemeje local government area, Oba Adetutu Ajayi, had escaped the kidnapper’s ambush a week ago. 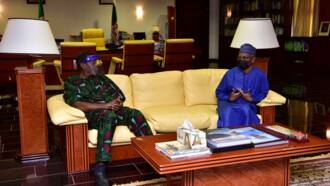 Nigeria’s victory against insecurity is around the corner, Pastor Adeboye declares

Legit.ng gathered that Oba Oyewumi was said to have been kidnapped in his palace by gunmen who scaled the fence, shot sporadically into the air and made away with him.

Commenting on the fearful trend, Muhammad Bukhari, a social commentator from the University of Benin, said the traditional monarchs are being attacked because they work with politicians, most of whom have lost their value in their country.

"They no longer regard kings in Nigeria like before because they frolick with politicians. Just few that still have value."