A video of two police officers attached to the Rapid Response Squad (RRS) being assaulted by a man who was stopped for driving against tra... 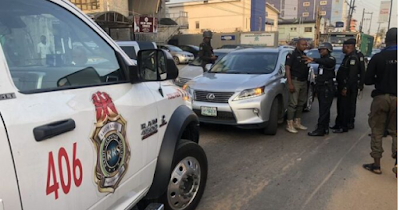 A video of two police officers attached to the Rapid Response Squad (RRS) being assaulted by a man who was stopped for driving against traffic has appeared on social media.

The less than three-minute footage showed the driver of a white car assaulting the two armed police officers.

In the video, another man who had accompanied the driver inside the car was heard shouting that they were stopped because they passed one-way traffic, wondering if the offense is enough for the police officers to stop their car.

The driver wearing a black shirt and a pair of short jeans was seen pushing one of the police officers at the scene by his chest while attempting to shove him on the ground.

Despite the efforts of passers-by to restrain the driver from assaulting the policeman, he kept pushing one of the police officers by his chest, boasting that there is nothing that would happen.

Surprisingly, the said police officer who was holding a rifle kept his cool, despite the confrontation of the driver.

The level of professionalism exhibited by the two police officers captured in the video in handling the situation is not something common with police officers in the country.

They drove against traffic, the police stopped them.

They came down and switched to naked ogboju

Those two Policemen Mehn! They deserve some accolades ???? ????
Thats some Jega stuff type of restraint. pic.twitter.com/zwIlewahIS

Reacting to the video, Jubril Gawat, a senior special assistant to the Lagos state governor on new media, said the driver has been arrested and currently at the state criminal investigation department, Panti.

Gawat noted that the driver’s car would be forfeited because he contravened the state traffic laws while urging residents to obey traffic rules.

UPDATE: The RRS Officers kept their cool as the guy kept pushing the officers, the guy is chilling in the State CID, Panti right now. All his ‘power’ has disappeared now ... @instablog9ja .... Here is the full video ... The Police Command will drop full details. @jidesanwoolu https://t.co/5mOK6pxf0W

The attitude showed by the police officers received commendations from many Twitter users.

Imagine how these guys are harassing a Police Officer.....this is disgusting!!! They’ll face the consequences anyway! Traffic violation and harassment!!! https://t.co/Rlew98QoDs

This is all shades of wrong! The @PoliceNG staff showed restraint on video- commendable.
To say this is the end result of #EndSARS or say it's 'yoots' is obtuse.
The one that hit an officer over the bridge was just as wrong in his action as these boys.
E je Ki ori yin pe ejoor. https://t.co/6UadkIZuD2

We need more of his kind.

God bless him.@segalink sir is there a way to know this officer name. https://t.co/xMBKHFTxz4

Only if we have these type of law abiding police officers at @PoliceNG, people will have respect NPF men

The stupid guy that locked an officer should be properly dealt with ???? and
Those police officers should be promoted, their lvl of composure is of the highest order ????‍♂️????‍♂️ https://t.co/W8qYYGlWaE