The Southern Kaduna Peoples Union, SOKAPU, has drawn the attention of Nigerians and the international community to another round of mass sac... 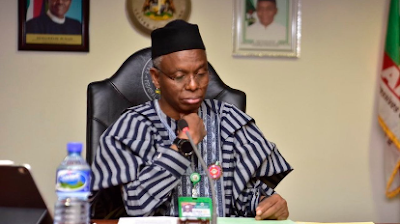 The Southern Kaduna Peoples Union, SOKAPU, has drawn the attention of Nigerians and the international community to another round of mass sack of workers in the state and local government civil service.

The union noted that the mass sack of the workforce has the potential of worsening the fragile peace and security situation in the state.

A statement by the President, Southern Kaduna Peoples Union, SOKAPU, Comrade Jonathan Asake, recalled that prior to the 2015 general elections, there was no doubt that the Southern Kaduna People saw in Malam Nasir Ahmad el-Rufai a man that was capable of entrenching justice, fairness and equity to all groups, adding that there was no doubt that he represented a beacon of hope for the state going by his robust campaigns across the state.

The statement lamented that little wonder, contrary to the traditional less than 10 per cent votes usually garnered by the opposition party since 1999, Mallam Elrufai secured 40 percent of the votes from Southern Kaduna in 2015.

The statement regretted that since assuming power, governor Nasiru el-Rufai has refused to do what he promised, instead, he has evolved deliberate policies and programs aimed at impoverishing the state, short-changing, oppressing, suppressing and dehumanizing the people of Southern Kaduna.

According to the statement, “Governor El-Rufai’s style of leadership since he became governor has been to dismantle all structures that ensured balance, justice, sense of fairness, inclusiveness and unity in areas such as political appointments, provision of social amenities, infrastructural development, he has only embarked in promoting divisiveness among our peace-loving communities among others.”

Comrade Asake observed that before El-Rufai became governor, he met a scenario where the diversities were well managed by his predecessors for peace, progress, development and harmonious coexistence, stressing that Mallam Elrufai could not ensure continuity with the cherished tradition but has continued to manipulate their diversities and caused unprecedented divisions among the people of the state along the faultlines of religion, ethnicity, political party affiliation, among many others.

He added, “More than anything else, governor el-Rufai has maintained an adversarial disposition against the people of the state, with community and religious leaders of Southern Kaduna extraction becoming his main targets of verbal warfare and interrogations. Without any evidence, he described Southern Kaduna leaders as “bigots and conflict entrepreneurs”, while sending some of our revered monarchs, elders and the clergy to jail on trump-up charges and unsubstantiated claims.”

According to Comrade Asake, “Throughout his first tenure there was such high level of insecurity in the state to the extent that revered Southern Kaduna monarchs were killed and others kidnapped, and were only released after the payment of heavy ransom. The Adara chiefdom was not only Balkanized after the brutal assassination of the Agwom Adara in 2019, but their elders were also detained on trump-up charges for over 100 days.

“El-Rufai is also obsessed with destroying other traditional institutions in Southern Kaduna by balkanizing and renaming chiefdoms unsolicited and in an insulting manner. He also created emirates where the culture, traditions and religious practices of majority of the people affected are not in any way related to the emirate system.”

He noted that in 2017, Mallam Elrufai embarked on retrenchment of no fewer than 21,000 teachers, thousands more in the civil service, pointing out that most of these people that were sacked, and others forced to go on voluntary retirement are yet to be paid their entitlements almost 6 years after they were forced out.

SOKAPU said it viewed the current mass sack as not only inhuman but a deliberate and orchestrated plan aimed at the further impoverishment of Kaduna citizens, having witnessed the mass travails imposed on previously sacked workers that are yet to be paid their entitlements.

“We also believe that the current exercise of sacking civil servants amounts to a calculated and callous act of mischief, heartlessness and wickedness that is set to destroy the public and Civil Service in the state, and subjugate everything under the whims and caprices of the governor. We conclude here that there is more to this exercise than meets the eye,” the statement observed.

It condemned the current sack of 4,000 local government workers across the state and opposed to any planned sack of civil servants that are 50 years and above and the planned casualization of public sector workers from grade level six down.

It called on the affected workers to resort to legal option and challenge what it called, “this gross injustice unleashed on them by the state government.”

It called on all men and women of good conscience, the Civil Society Organizations, NGOs, the International Community and all those that are committed to justice and fair play not to allow these injustices caused by the administration of el-Rufai to go unchallenged but to join other voices against the current mass sack of the Kaduna state workers.