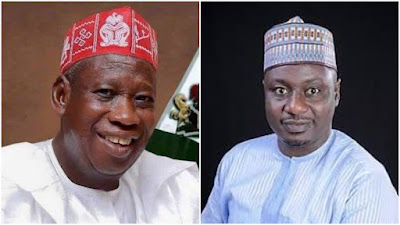 A close media associate told PRNigeria that unknown persons have been on the pressman’s trail.

“Jaafar’s life is in danger as unidentified persons, likely to be hit men, have been stalking him both at his Abuja and Kano residences,” the ally said.

In 2018, Jaafar released footages of Ganduje receiving stacks of dollars.

The cash was alleged to be kickbacks from contractors handling projects awarded by the Kano State Government.

The Ganduje administration dismissed the authenticity of the videos. Information Commissioner, Muhammad Garba claimed it was “doctored”.

In a recent interview with BBC Hausa, Ganduje said those who publicized the video would be dealt with.

He told federal authorities that Ganduje should be held responsible if anything happened to him.

On April 14, 2021, the IGP Monitoring Unit invited the journalist for questioning for “inciting violence and spreading injurious falsehood”.

A letter signed by ACP A. A. Elleman, said the office was “investigating a case of Criminal Conspiracy, Defamation, Injurious Falsehood and Inciting Violence to the Inspector General of Police in which your name featured.

“In view of the foregoing, you are kindly requested to interview the undersigned on Monday 19th April 2021 by 10.00am prompt through SP Usman Garba (Admin Officer) to shed more light on the allegation.”