Arsenal’s season was left in tatters as Villarreal held on for a 0-0 draw at the Emirates Stadium to secure a 2-1 aggregate victory and a pl... 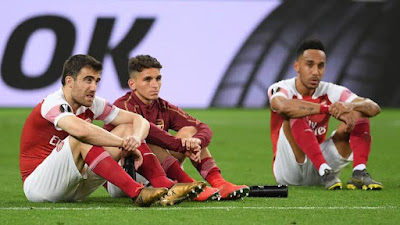 Arsenal’s season was left in tatters as Villarreal held on for a 0-0 draw at the Emirates Stadium to secure a 2-1 aggregate victory and a place in the Europa League final against Manchester United.

Following a 2-1 defeat in Spain in the first leg last week, the Gunners were sluggish as they tried to find the goal they so desperately needed, but they did have chances.

Pierre-Emerick Aubameyang’s volley struck the outside of the post in the first half and the Gunners skipper’s header hit the inside of the upright and bounced out with 11 minutes remaining.

The hosts, who threw on Gabriel Martinelli, Alexandre Lacazette and Willian in the closing stages, piled forward, but it wasn’t to be their night as Unai Emery got the better of his former side, with Villarreal reaching their first-ever European final, where they will face United in Gdansk on May 26.

Meanwhile, defeat in the tie caps yet another bad night in what has been a difficult campaign for Mikel Arteta and Arsenal.

The Gunners now face the prospect of not qualifying for a European competition for the first time in 25 years.

Manchester United and Villarreal will face off in the Europa League final after completing respective last-four wins over Roma and Arsenal on Thursday.

#BBNaijaReunion: Kaisha Walks Out Of The Show After Neo Failed To Admit He Liked Her 0

BBNaija Reunion: Neo tried to kiss me, had feelings for me– Kaisha reveals 0

How Burna Boy Wants to Celebrate His 30th Birthday 0

Chamisa wants ZACC to be disbanded 0

Former university students remember woman who used to run errands for them, give her money, fully-stocked shop 0

Pregnant woman, two others die in another Lagos-Ibadan road crash 0

Bobrisky To Throw Party To Unveil New Body After Surgery 0

La Liga: Spain to allow fans at stadiums next season 0

Get the Sax, make some music – Wizkid replies Seun Kuti 0

The Weeknd Now Has One Of The Biggest Songs In History, as he Breaks New Record 0

Demolitions are an act of witchcraft and trully demonic 0

Ace Magashule suspension was a 'coup' 0

‘I Was Banned From Nollywood’ – Rita Dominic Reveals 0

”He Was Set Up” – Veteran Actor, Deji Aderemi Reacts As Baba Ijesha Is Granted Bail (Video) 0

UEFA: The away goals rule will be removed from 21/22 season

Sheikh Ahmad Gumi, a popular Islamic cleric, says security agencies have questions to answer about the activities of banditsGumi has raised concerns about how

An Abuja court has ruled that President Buhari did not violate any law by extending the tenure of the former IGP, Muhammed Adamu, for three

#BBNaijaReunion: Kaisha Walks Out Of The Show After Neo Failed To Admit He Liked Her

Former BBNaija housemate, Kaisha, has sparked reactions on social media after Neo failed to admit that he liked her during their stay in the BBNaija