The national leadership of Miyetti Allah Cattle Breeders Association of Nigeria (MACBAN) says the North must not ignore the ban on open gr... 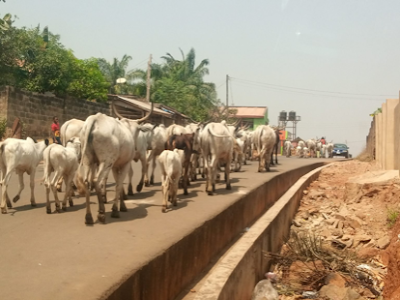 The national leadership of Miyetti Allah Cattle Breeders Association of Nigeria (MACBAN) says the North must not ignore the ban on open grazing by Southern Governors.

The General Secretary, Baba Othman Ngelzarma in his statement urged Governors in the region to open talks right away.

Noting that the organization is not opposed to settlement of pastoralists nationwide, the scribe called for a proper arrangement.

Ngelzarma regretted there was “no attempt” by past administrations to modernise the animal husbandry practices in Nigeria.

He said pastoralists practice the “primitive system” they inherited, and stressed such is no longer sustainable considering the growing population and “land that doesn’t increase”

“The herders are bonafide citizens whose rights and privileges deserve protection…the position of Southern Governors must NOT be ignored,” Ngelzarma declared.

“The Northern Governors must open discussion with their southern counterparts on the matter in order to come up with an acceptable position for both farmers and herders.”

MACBAN urged the federal government to come up with a plan to address Nigeria’s unity and assist Northern States to establish modern settlements (ranch).

“The National assembly must legislate on the matter to bring an end to the problem. There are about 400 grazing reserves in the North that covers an area of about 5 million hectares.”

MACBAN wants state governments to consider the provision of water and grass in those reserves to make them attractive to herders as an interim measure.

Ngelzarma appealed to Southern Governors to consider the plights of the pastoralists in their anti open grazing policy.

He said some of the herders were born and raised in the South and appealed for caution to avoid worsening the country’s security situation.