Governor Samuel Ortom of Benue State has accused the Presidency of “a hidden agenda.”   Ortom made the remark while faulting President... 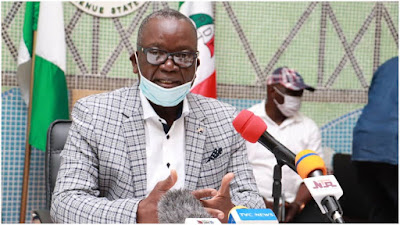 Governor Samuel Ortom of Benue State has accused the Presidency of “a hidden agenda.”

Ortom made the remark while faulting President Muhammadu Buhari’s insistence on grazing reserves.

The governor said that the Federal government’s insistence on grazing reserves in the country was a misplaced priority.

A statement by Garba Shehu, Buhari’s spokesman had said the Federal Government would next month commence rehabilitation work on grazing reserves in the country.

However, a statement by his Chief Press Secretary, Terver Akase, the governor said: “We read a statement issued by Senior Special Assistant to the President on Media and Publicity, Mallam Garba Shehu in which he said the Federal Government will commence rehabilitation work on grazing reserves in the country next month.

“We find the move not only shocking and curious but also a misplaced priority. At a time the country is worried about the worsening security situation and many Nigerians are calling for national dialogue to address the fundamental issues that have led to the present state of affairs, the Federal Government considers the reopening of cattle grazing routes as the only solution available to it.

“It is now clear that there is a hidden agenda which only the Presidency knows. Otherwise, all the regions of the country have accepted the fact that open grazing of animals is no longer fashionable and should be banned to pave way for ranching, yet, the government at the centre is insistent that grazing reserves/cattle routes must be created across the country.”

On February 9, the Northern States Governors’ Forum (NSGF) met and agreed that the current system of herding mainly by open grazing is no longer sustainable, in view of growing urbanisation and population of the country.

The Forum consequently resolved to sensitize herders on the need to adopt ranching as the new method of animal husbandry.

The 17 Governors of Southern Nigeria rose from their meeting in Asaba on May 11 also this year, with a ban on open grazing in the entire region. The Southern Governors equally adopted ranching as the alternative method of rearing animals.

However, Ortom added: “As it stands, the Presidency is the lone hand pushing for the continuation of open grazing and the return of cattle routes of 1950s and 60s. The Presidency has, by its endorsement of open grazing, emboldened armed herders who lay claim to all lands in Nigeria as belonging to Fulani, hence their invasion of farming communities and killing of original owners of such lands.”