Matteo Pessina scored as Italy made it three wins out of three at Euro 2020 by beating 10-man Wales 1-0 to finish top of Group A on Sunday w... 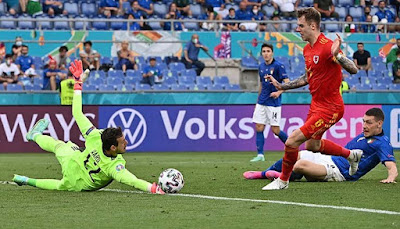 Matteo Pessina scored as Italy made it three wins out of three at Euro 2020 by beating 10-man Wales 1-0 to finish top of Group A on Sunday with both teams advancing to the last 16.

Pessina’s goal means Italy will play the runner-up from Group C in the next round, with Wales facing the team that comes second in Group B.

In his 35th game in charge of the Azzurri who failed to qualify for the 2018 World Cup, Roberto Mancini’s side also matched an 80-year Italian record.

It was also an 11th consecutive win with a clean sheet for Italy who had already booked their ticket to the knockout rounds with a game to spare.

Italy will play Ukraine or Austria at Wembley on June 26 for a spot in the quarter-finals.

Wales, semi-finalists in 2016, suffered in a game they played a man down for most of the second half after Ethan Ampadu was sent off for a foul on Federico Bernardeschi.

Real Madrid’s Gareth Bale, Wales’ all-time leading scorer with 33 international goals, could not add to his tally missing a chance for the equaliser in the final quarter of an hour.

Wales coach Robert Page made three changes to his starting line-up, Ben Davies, Chris Mepham and Kieffer Moore dropping to the bench with the trio one booking away from suspension.

Mancini also brought in fresh players for their final group game with eight changes, and a three-man frontline with Federico Chiesa, Andrea Belotti and Federico Bernardeschi.

Paris Saint-Germain’s Marco Verratti proved decisive on his return from injury after a six-week layoff.

Belotti threatened after 12 minutes but Wales goalkeeper Danny Ward held firm with Emerson Palmieri then missing a chance from a distance.

Rafael Toloi fired another which took a deflection off his Atalanta teammate Pessina, into the arms of Ward, while Chiesa missed an opportunity to latch on a Belotti shot across goal.

But Pessina broke through six minutes before half-time with a flick off a Verratti free-kick leaving Ward with no chance.

It was the first goal for Italy in a major competition for the Atalanta player who had been called up as a late addition after Stefano Sensi’s injury.

Francesco Acerbi replaced Leonardo Bonucci at half-time with an eye towards the knockout rounds.

Bernadeschi missed a chance for a second after the break with a free-kick from distance hitting the post.

And Wales’ task got even more difficult when Ampadu was sent off 10 minutes after the break for a late challenge which caught Bernadeschi’s ankle.

Cardiff City striker Moore came off the bench after an hour in place of Joe Morrell with Bale reverting back to midfield.

Bale missed a golden chance to level after 75 minutes with Moore crossing for the unmarked skipper who volleyed over.