Argentina national football team captain Lionel Messi has finally fulfilled his promise to a football fan in Brazil who had the tattoo of the Barcelona star on his back.

TyC Sports via Tribuna are reporting that Messi has been spotted in a video registering his signature at the back of the fan with the Leo tattoo.

Further reports claim that when the Barcelona captain discovered that someone in Brazil had a Leo tattoo of his iconic celebration vs Real Madrid on his back, the six-time Ballon d’Or winner stated that he would love to sign it. 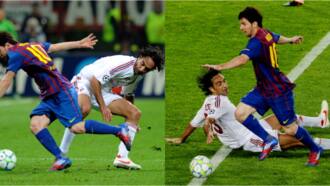 A clip currently making the rounds have now shown Messi meeting the fan and leaving his signature on his back.

It was also gathered that fans thronged the area as they gathered to have a glimpse of the legend, while some were lucky to get the chance of taking pictures.

However, due to coronavirus restriction, the 33-year-old Argentina captain had to go back inside quite shortly.

He is currently in Brazil where he is representing his national team at the 2021 Copa America.

La Albaceleste began the tie on a promising note right from the first blast of the whistle and then went ahead in the 13th minute courtesy Guido Rodriguez.

And credit also goes to Lionel Messi who took on Torreira to get some space before placing a delicious cross towards Rodriguez who headed home. 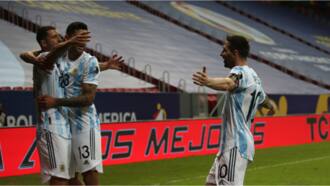 It would have been two-nil but Messi and the forwards did a good job keeping the ball in their half to run out the clock.

The final whistle came, and Argentina are winners thanks to a very good team performance.

Messi’s current contract with the Catalan giants will lapse at the end of June, but the 33-year-old is yet to sign a new deal.

He has been linked with Paris Saint-Germain and Manchester City over the past months but the Barcelona chief insists the six-time Ballon d’Or winner wants to remain.