For every N100 the administration of President Muhammadu Buhari made in the first five months of 2021, N97 was used to pay off debtors owned by the Federal Government.

Between January to May this year, the Nigerian government recorded a turnover of N1.84 trillion, but it used N1.8 trillion to service its debt. 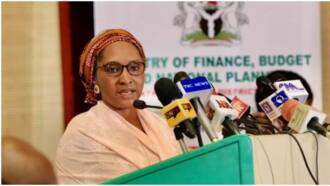 This means for the most part of the first half of 2021, the Federal Government's debt-to-revenue ratio was 97.8%, and it has used 72.2% of its projected debt service for the year.

Note that FG had projected that debt service will gulp N3.1 trillion in twelve months of 2021, an amount that will be sourced from N6.6 trillion revenue.

This put the government's projected debt service to revenue ratio for 2021 at 46.9%, which is lower than the debt service estimated for 2022.

It was gathered that next year, President Buhari's administration will spend N3.6 trillion to pay off debt. For 2022, FG forecast its revenue to be N8.35 trillion.

In similar news, Legit.ng had previously reported that Nigeria's total debt has risen to N33.1 trillion under President Buhari's administration.

But since he became President in 2015, N21 trillion has been borrowed to fund infrastructure and salaries of his government.

Breakdown of the debt shows that over N10 billion has been borrowed daily, and every Nigerian owes about N160,000 considering the country's debt.

Join us in shutting down Nigeria on October 1 – IPOB begs Oduduwa agitators, others 0

BBNaija: What I truly wanted from Whitemoney – Queen 0

What makes eNaira different from money in your bank account 0

Anambra guber poll will hold as scheduled, security measures are being put in place — INEC 0

If Nigeria breaks up, all of us will lose out –Osinbajo 0

BBNaija: Whitemoney not happy to see us – Angel tells Pere 0

Please forgive me – Bobrisky apologises to Tonto Dikeh after fight 0

#BBNaija: Emmanuel emerges as the last Head of House for the season 0

#BBNaija: WhiteMoney is not happy we came back to the house, his laugh is fake – Angel 0

Expect a new album from Mayorkun this October 0

I didn’t even step foot into Canada — DJ Switch 0

Dokora steps down in Chairmanship race 0

'The only way to unite ZANU PF camp is through election,' says Mugabe 0

Let's all register to vote and kick out our leaders 0

If a dead body is not given proper funeral, the car carrying it can stop working - Driver makes big revelation 0

Man with a heart: BBNaija Saga speaks on why he was affected by Nini’s disappearance from the house 0

Emmanuel's dad talks about his relationship with Liquorose, says they are doing the right thing 0

Osimhen, Sadio Mane ignored as most valuable footballer from African continent is named 0

BBNaija: What Whitemoney told me about getting to finals – Liquorose 0

Insecurity: Why Nigerian elites including me are in danger — Ngige 0

BBNaija: Queen reveals real intentions of getting close to Whitemoney 0

If Nigeria Breaks Up, All Of Us Will Lose Out – VP Yemi Osinbajo 0

FFK Shares Lovely Photos of Himself and His Woman, Nerita 0

#BBNaija: Whitemoney not happy to see us – Angel tells Pere 0

#BBNaija: ‘I wondered how her boyfriend felt’ – Saga clarifies moments shared with Nini in the house 0

#BBNaija: We already selected Whitemoney as the winner, Cross tells other housemates 0

'Bona - Mnangagwa fight over Mugabe's dead body to get nasty' 0

Kazembe, Matanga to pay US$12 000 compensation for unlawful arrest, detention and prosecution 0

Shock as July Moyo accused of using juju against Mnangagwa 0

Ex-PL star slams Arsenal fans, tells them to stop acting like they have won UCL title after Spurs victory 0

Bride pauses at wedding to catch a glimpse of her dad as he throws feet in the air, does fine legwork in video 0

Juventus vs Chelsea: Tuchel reveals what his players need 0

Saraki fumes as Kwara demolishes library named after his father 0

Banditry in Southern Kaduna: If I open up on what I know, heads will roll – Senator La’ah 0

Former boxer, David Haye, has advised Anthony Joshua on how he can beat Oleksandr Usyk in their rematch. Recall that Joshua was outboxed and... Former boxer,

Join us in shutting down Nigeria on October 1 – IPOB begs Oduduwa agitators, others

The Indigenous People of Biafra, IPOB, on Tuesday, urged other ethnic nationalities in Nigeria to join in shutting down the country on Oct... The Indigenous

BBNaija: What I truly wanted from Whitemoney – Queen

Big Brother Naija Shine Ya Eye ex-housemate, Queen, has said that what she truly wanted from Whitemoney while she was on the show was