Benue - Ahead of the 2023 general elections, the Peoples Democratic Party (PDP) is making sure no stone is left unturned for victory.

Speaking on the meeting and other plans by the opposition party, Governor Ortom told journalists that the PDP is on a realignment mission, Vanguard also reports.

“This is a family meeting for us to reason together in order to make our party more vibrant because Nigerians are waiting for us to take over the mantle of leadership at the centre in 2023.”

Meanwhile, despite the clamour for the shift of power to the south after President Muhammadu Buhari's tenure in 2023, some members of the PDP in Katsina state, had revealed why the north should retain the seat.

The PDP members on Saturday, July 17, declared that the North Central part of Nigeria should produce the next president in 2023.

Legit.ng gathered that the PDP members, who were led by a party leader in the state, Abubakar Adamu, declared their support for a former Senate president, Abubakar Saraki, to be president in 2023. 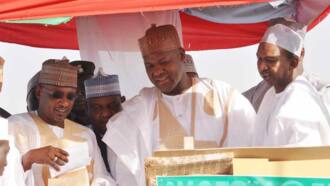 According to Adamu, who spoke on behalf of the party members, Saraki had the wherewithal to lead Nigeria, citing his performance as a two-term governor of Kwara state and Senate president.

“It is an open secret that we currently have security challenges in Nigeria. So, we need someone who can secure Nigeria for the sake of the future of our youths. In addition, If you consider the votes the PDP got in the 2019 election, for instance, it clearly showed that the north-central is owned by the PDP because the votes we got there were more than two million."