Popular Links: Buhari Football EFCC Boko Haram Trending Nigerian Names Politics
Home | News | General | I could visit Daura every 2 weeks and no one can stop me, Buhari declares, Emir reacts
Peruzzi angrily storms out of nightclub, shoots in the air after fans told him to apologise for coming late
Emotional Moment Housemaid is gifted 4-bedroom apartment after 20 years of cleaning, she cries in the video

I could visit Daura every 2 weeks and no one can stop me, Buhari declares, Emir reacts

Daura, Katsina - President Muhammadu Buhari said could take a trip to his hometown, Daura, Katsina state, every two weeks if he liked and nobody could stop him.

He, however, said there were things to put into consideration such as the high cost that presidential movements accrue and exposing security personnel to the weather, PM News reports. 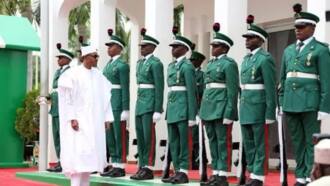 According to Buhari, he would prefer the money be put to better use like improving schools, clinics and hospitals.

The president made the statement on Friday, July 23, when he paid a visit to the Emir of Daura, Dr. Umar Faruk Umar, at his palace.

He noted that his people are known for farming and he also has his farm in Daura.

Expressing regret over his inability to visit his kinsmen often, he gave them assurance that his heart remains with them.

Also speaking, the Emir of Daura expressed his gratitude to President Buhari for always creating time to visit his hometown and the palace despite his tight schedule.

According to him, Nigeria is lucky to have someone like Buhari “at this point in time”, Daily Trust reports.

The traditional ruler who believes the president has done well said the visit to Daura was a reflection of his good character. He added that the people were proud of him.

Emir of Daura: Things would be difficult, Nigerians lucky to have Buhari as president

The monarch added that the people will not stop praying for Buhari.

President Buhari has been celebrated by his people after he put smiles on their faces.

In the spirit of the Eid-el-Kabir festivities, the Nigerian leader on Friday, July 23, made a donation of 22 cows to serving military personnel in Daura, Katsina state.

Buhari on Friday concluded an eight-day working visit to his Katsina, where he spent the Eid-el-Kabir celebration in his country home.