The Pan Niger Delta Forum (PANDEF) has asked Igbo leaders to denounce the statement made by the proscribed Indigenous People of Biafra (IP... 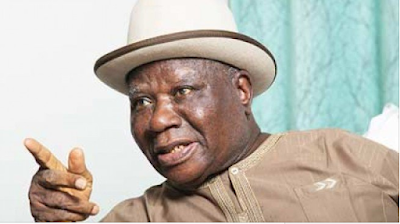 The Pan Niger Delta Forum (PANDEF) has asked Igbo leaders to denounce the statement made by the proscribed Indigenous People of Biafra (IPOB) about Edwin Clark, an Ijaw leader.

PANDEF demanded that Igbo leaders tender a public apology to Clark in the interest of “healthy relations” between the south-east and south-south.

Clark had said IPOB must be dreaming if it believes the south-south region will join the agitation for the Republic of Biafra.

In response, IPOB had said the Ijaw leader cannot decide on whether the Niger Delta will be part of Biafra while adding that his comment is one of the reasons ”Biafrans” are being treated as slaves.

Commenting on the development, PANDEF, in a statement issued by Emmanuel Ibok Essien, its national chairman, insisted that the Niger Delta is not part of Biafra, adding that it is “puerile” for IPOB or any group to consider the region in any “arbitrary contraption”.

PANDEF noted that the influence of Clark transcends the south-south zones, adding that the Ijaw leader has been playing nationalist roles to “stimulate unity, peace and development in the Niger Delta Region, and Nigeria, at large”.

“It is a shame that they cannot differentiate between fact and fantasy. This stupidity would erode any sympathy they had hitherto received from the South-South geo-political zone,” the statement reads.

“Let us restate, without any equivocation, that the Niger Delta Region is not part of Biafra and that no inch of the South-South Geopolitical Zone shall be part of any imagined “Republic”.

“It’s rather puerile for IPOB or any other group to consider that Niger Delta Region would be part of any arbitrary contraption. If it becomes necessary for the Niger Delta people to pull out of this country, we shall do so, on our terms.

“Over the years, the highly respected Chief who was a Federal Minister of Information, and Distinguished Senator of the Federal Republic, has in his capacities as an educationist, politician, public servant, lawyer, lawmaker, community leader and nationalist, continued to play vital roles to stimulate unity, peace and development in the Niger Delta Region, and Nigeria, at large.

“Though PANDEF assumes no well-meaning Igbo son or daughter would sanction the aspersion by IPOB on our respected National Leader, however, we would insist that the Leadership of the Igbo Nation denounce the irresponsible statement by IPOB.

“And tender a public apology to the Elder Statesman, and, indeed, the entire Niger Delta people, in the interest of healthy relations between the South-East and South-South Zones. Anything short of that would be inferred to be tacit approval of the balderdash of IPOB.”