Low turnout of voters marked the LGA elections in Lagos state on Saturday.   Many of the polling units in Badagry, Alimosho, Epe, Mush... 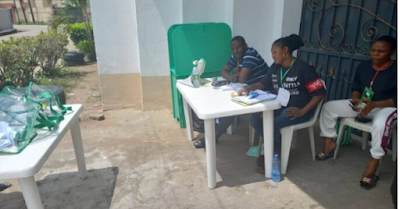 Low turnout of voters marked the LGA elections in Lagos state on Saturday.

Many of the polling units in Badagry, Alimosho, Epe, Mushin, Ikeja and Odi-Olowo recorded a paucity of voters.

Monday Avoseh, a voter at ward C, Awhajigoh, Badagry, said the low turnout was due to voter apathy.

At Ajara-Topa ward C, Babatunde Hunpe, a lawmaker representing Badagry federal constituency in the House of Representatives, said it was not too late for voters to show up.

In Epe, at ward D, polling unit 003, the polling officer said 689 voters registered, but so far, only 20 eligible voters had been accredited.

At Mushin and Odi-Olowo, the exercise was characterised by the late arrival of voting materials and low turnout.

‘WE WERE UNAWARE OF THE ELECTION’

Some Lagos residents expressed their dissatisfaction with the ongoing election.

According to NAN, some of the residents said they thought the election had been postponed while some said they had no knowledge of the exercise.

The electorate alleged that there was insufficient public awareness concerning the election.

Anayo Nebonta, a resident of Oto Awori LCDA, was quoted by NAN as saying he only “got wind of the election this morning” on his way to his business.

He expressed dissatisfaction with the “poor publicity” of the process and urged that it be made better in the future.

“This morning, many Lagos residents were not even aware of this local council election, and we were asking ourselves if this election is meant for some segment of the state, because if we are not aware then who are those to cast the votes,” Nebonta said.

“I had planned my business for today only to be informed of the restriction of movement.

“I advice that in a democratic setting like Nigeria, there should be sufficient publicity, to prepare voters for the exercise. This is because we are the ones to select our leaders.”

Kehinde Adegoke, another voter at ward B, Oto Awori, said: “I will say that some Lagosians are not aware that there will be elections today.

“Personally, I will not pretend I had prior knowledge of this election but I got to know during my discussion with friends last night.

“So, this morning, as I was on my way to the ward, I even saw some people who were turned back by the police and one could see that they were going for their respective businesses.

“I really don’t know what happened and how it happened but I think the information on the election did not go round.”

On her part, Iyabo Oloruntobi said she was informed that the election had been postponed.

“In fact even me, when I came out this morning, everyone in my area was saying there was nothing like election,” she said.

“I went back to my house but later decided to come out again when I discovered no vehicle was moving and I saw some policemen. That was what gave me assurance that there will be an election.”

“WHY WE ARE NOT VOTING”

Some residents of Jakande Estate, Oke-Afa, said their apathy towards the election was borne out of their disappointment with some elected politicians in the area.

NAN quoted some residents as saying politicians had failed to fulfill their campaign promises, hence, their decision not to vote.

Tunde Adediji, one of the residents, said he came out to observe the process but not to vote.

Adediji said the roads in the area were bad and not attended to by the council.

Yusuf Amuda, another resident, said Nigerians are now more conscious of what is happening in the country.

According to him, many politicians in the area “promised everything during their campaign but failed to deliver and disappear until the next election”.

Also speaking, Ronke Adegbenro, lamented that what is meant for everybody is usually shared among a few and that only card-carrying members of parties benefit from such gestures.

She said many of the politicians in the area become inaccessible once elected into office.