The 19-year-old was assured of a medal after making it to the final where he took on Italian Vito Dell'Aquila who he lost to.

The match was balanced as the two tied 10-10 before Dell'Aquila scored decisively in the final 15 seconds to cart home the gold. 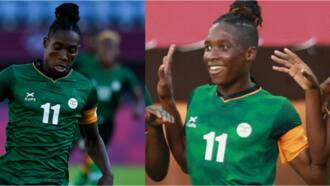 Jendoubi laid down an early marker when he stunned Ethiopia's Solomon Dense in the quarters to book a semifinal meeting with Hang Jun of South Korea.

While many thought Hang Jun posed the biggest threat to Jendoubi, the Tunisian beat all the odds to secure a win over the South Korean who was favourite to win the gold.

Jendoubi now becomes only the second Tunisian to win silver at the Olympics after long-distance runner Mohammed Gammoudi.

Qian Yang, a Chinese Shooter has become the first winner of a gold medal at the ongoing Tokyo 2020 Olympic Games.

China will be in strong competition with the United States after the Asian nation finished second in the last Olympics.

Elsewhere, Fethi Nourine is the first athlete at the Tokyo 2020 Olympic Games to have been sent home after withdrawing from competing with Israel's Tohar Butbul, Complete Sports, Japan Times. 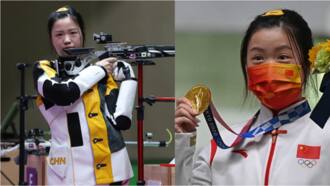 Nourine was slated to face Butbul in the second round of the 73kg men's category if he went past Sudan's Mohamed Abdalrasool.

The 30-year-old told the press that he withdrew because his support for Palestine is bigger than his Olympic dreams.

Earlier, Legit.ng had reported how Qian Yang was the first athlete to go on the podium as a gold medalist after emerging winner in the women’s 10-meter air rifle.