Nigerian basketball team, D’Tigers, lose their first game at Tokyo Olympics 2020 by a 19-point deficit to Australia at the Saitama Super A... 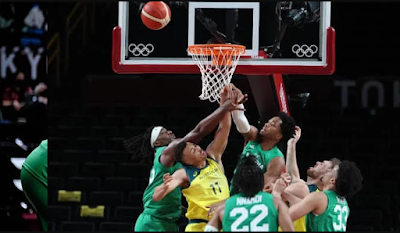 Nigerian basketball team, D’Tigers, lose their first game at Tokyo Olympics 2020 by a 19-point deficit to Australia at the Saitama Super Arena, Japan on Sunday.

The game ended 84-65 in favour of the world number three.

The Nigerians face Germany on Wednesday for their second match.

Both teams recently faced off in an exhibition game in Las Vegas, with the Aussies claiming an emphatic 108-69 win over the Nigerians, who will not want a repeat of the result at the Games.

Nigeria, who have eight NBA players in their ranks, including Jordan Nwora, who recently won the NBA title with the Milwaukee Bucks, headed into the game hoping they have corrected the lapses that led to their embarrassing 39-point deficit loss last time out.

Experienced Matthew Dellavedova had previously played for the Cleveland Cavaliers and the Milwaukee Bucks between 2013 and 2020.