Saliu Adetunji, the Olubadan of Ibadanland, says he has sent a delegation to Cotonou, Benin Republic, to observe court proceedings in the ... 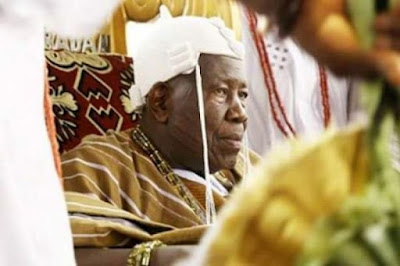 Saliu Adetunji, the Olubadan of Ibadanland, says he has sent a delegation to Cotonou, Benin Republic, to observe court proceedings in the trial of Sunday Adeyemo, a Yoruba nation agitator, also known as Sunday Igboho.

Igboho is standing extradition trial in Cotonou after he was arrested with his wife at Cotonou airport on their way to Germany and placed in custody. The court on Thursday freed the wife while Igboho will appear in court again on Monday.

A statement signed by Adeola Oloko, personal assistant/director of media and publicity to the monarch, said those selected to be part of the delegation will be at the court in Cotonou, where Igboho’s case will resume on Monday.

The statement said, “Oba Adetunji stated this at his Popoyemoja, Ibadan palace on Sunday while exchanging views with some leaders of thought comprising Yemisi Adeaga, the president general of Central Council of Ibadan Indigenes and his executive members. Also at the meeting was senior chief Lekan Alabi, the Ekefa Olubadan.

“Olubadan said it has become necessary in order to allay the fears of several people, including protesters who besiege Olubadan palace every now and then that Kabiesi is not folding his arms over the travails of Igboho.

“Igboho lives in Ibadan, got married in Ibadan, rear children in Ibadan, built houses in Ibadan and as such he has the rights to be protected by Ibadan traditional institution within the ambit of the law just like any human being in Ibadan.”

Olubadan stated that he is in constant touch with Yoruba prominent royal fathers, including Igboho royal crowns to allay public fears of a repeat performance of Yoruba-Fulani coalition of 1814.

The statement added, “Students of Nigeria history may wish to be reminded that when some people, during the period under reference, chose to engage in territorial expansion to the sea, it took the Ibadan army under Balogun Oderinlo to repel the attack and stop the incursion near Osogbo.”