The trial of Nnamdi Kanu, leader of the proscribed Indigenous People of Biafra (IPOB), will continue on Monday before a federal high court... 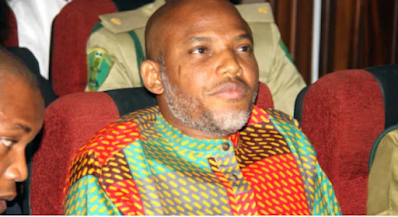 The trial of Nnamdi Kanu, leader of the proscribed Indigenous People of Biafra (IPOB), will continue on Monday before a federal high court in Abuja.

Kanu was arrested on June 25 and extradited to Nigeria to face trial for alleged treason.

Abubakar Malami, attorney-general of the federation (AGF), had said the IPOB leader was “intercepted through the collaborative efforts of Nigerian intelligence and security services”.

Binta Nyako, judge presiding over Kanu’s case, had ordered that he be remanded him in DSS’ custody, pending the continuation of his trial.

HOW IT ALL BEGAN

The DSS had first arrested Kanu in October 2017.

The federal government on December 18, 2015, filed a six-count charge bordering on treasonable felony, managing an unlawful society, publication of defamatory matter, illegal possession of firearms and improper importation of goods.

Those originally charged along with Kanu were Benjamin Madubugwu and David Nwawuisi.

However, on November 9, 2016, the charges were amended to 11 counts with the inclusion of treason and some other offences.

In the amended charges filed Chidiebere Onwudiwe, the national coordinator of IPOB, was added to the defendants, bringing the number of accused persons to four.

On March 1, 2017, Justice Nyako quashed six out of the 11 count charge. She held that the prosecution failed to show evidence that the defendants belonged to an “illegal” organisation.

She also held that claims by the prosecution that the defendants were improvising how to make explosive devices cannot hold water because there was no proof. She also quashed the charge bordering on illegal importation.

Consequently, the defendants were re-arraigned on an amended five-count charge.

ADMITTED TO BAIL ON HEALTH GROUNDS

In April 2017, Kanu was admitted to bail on health grounds.

The bail was on the condition that he must not hold rallies, must not grant interviews,  must not be in a crowd of more than 10 people, must provide three sureties in the sum of N100 million each.

One of the sureties must be a senior highly placed person of Igbo extraction such as a senator.

The second surety must be a highly respected Jewish leader since Kanu said his religion is Judaism.

The IPOB leader must deposit his Nigerian and British passports with the court. He must provide the court with reports on the progress of his health and treatment on a monthly basis.

Kanu fulfilled his bail conditions and left prison on April 28.

He, however, skipped bail in September 2017 after flouting all the conditions given to him by the court. The IPOB leader subsequently went into hiding during a military operation in the southeast where he is from, only to reappear after one year in Israel.

In February 2018, the judge gave permission to the federal government to separate the charges against Kanu from that of his co-defendants.

On March 28, 2019, Nyako issued an arrest warrant against Kanu, citing his continued absence in court.

The court also revoked the bail which it granted the IPOB leader and directed the proceeding will still continue even in his absence.

Kanu’s case was first assigned to Adeniyi Ademola, a federal high court judge, who later had to step aside following accusations by the defendants that they may not get a fair hearing.

John Tsoho, another judge, who was to take over hearing, also had to hands off the case as well on allegations of bias and the case file was returned to Ibrahim Auta, the then chief judge of the federal high court, for re-assignment.

Binta Nyako was then assigned the case in November 2016.

From recent happenings and statements by government officials, there are indications that the charges against the IPOB leader may be increased.

For example, the federal government said Kanu orchestrated the killing of 60 people and the destruction of property in 55 violent attacks across the south-east and south-south zones within four months.

If Kanu is found guilty, he risks spending a lifetime jail sentence or worse of, death!

For the offence of terrorism, Section 4 of the Terrorism Prevention Act states that: (1) A person who knowingly, in any manner, solicits or renders support for (a) an act of terrorism; or (b) a proscribed organisation or an internationally suspected terrorist group. an offence under this Act and shall on conviction be liable to imprisonment for a maximum term of 20 years.

(2) without prejudice to subsection (2) of this section, where death results from any terrorist act the penalty shall be death sentence.

For the offence of treason/treasonable felony, Section 37 and Section 41 of the Criminal Code Act prescribes either life imprisonment or a death sentence.