The Police in Benin Republic, on Monday, chased out hundreds of Yoruba Nation activists and journalists from the premises of the Cour De’a... 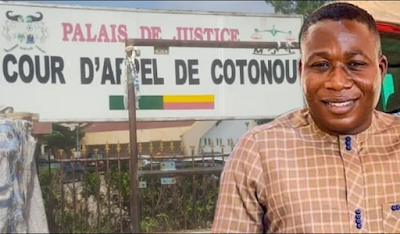 The Police in Benin Republic, on Monday, chased out hundreds of Yoruba Nation activists and journalists from the premises of the Cour De’appal De Cotonou, the venue of the hearing of the case against Sunday Adeyemo, also known as Sunday Igboho.

It was gathered that the policemen came in about seven trucks and dispersed the Yoruba Nation supporters who gathered on the court premises awaiting the position of the court.

The Beninise court is currently in session as of the time of filing this report.

The court had earlier barred journalists and supporters of Igboho from the courtroom but allowed the agitator’s lawyers and his wife, Ropo, inside the courtroom.

The court is currently investigating the allegations brought against Igboho by the Federal Government of Nigeria which claimed, amongst other things, that the activist is a gun runner. The court is also expected to rule on the extradition or otherwise of Igboho.

Igboho and his wife were arrested at the Cadjèhoun Airport in Cotonou around 8pm on July 19, 2021, while they tried to catch a flight to Germany.

But the court, last Thursday, ordered the release of his wife but returned Igboho to police cell.

Igboho was earlier declared wanted by the Department of State Services in Nigeria for allegedly stockpiling arms, an allegation he denied.

The secret police on July 1, 2021, had raided his house, killed two of his associates and arrested about 12 of them.