Cristiano Ronaldo has shut down all speculations linking him with a move to Paris Saint Germain this transfer window after re-joining his Juventus teammates in training on Monday, July 26.

He scored five goals and one assist in four games in the competition despite crashing out at the last-16 stage earlier this month.

The 36-year-old arrived in Turin over the weekend and was seen walking into the training complex in Continassa earlier this morning - with a number of fans waiting to receive him. 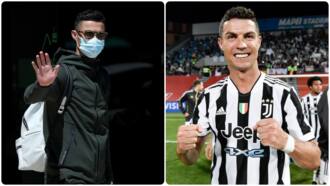 Some of the supporters also got autographs while others took selfies with the five-time Champions League winner who covered his face with a mask due to the COVID-19 scare.

According to ronaldo.com, the forward will first undergo a medical before joining the rest of the team for the preparation of the new season kicking off in a few weeks from now.

Ronaldo was heavily criticised last season after the Old Lady struggled to qualify for the Champions League until the last day of the season, but he seems to have pushed that behind him.

Cristiano Ronaldo is back in Italy for the new season

Legit.ng earlier reported that Cristiano Ronaldo may have ended all speculations linking him away from Juventus this summer after touching down in Turin on Sunday, July 25. 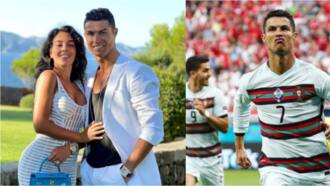 The five-time Ballon d'Or winner has been linked with a move away from the Old Lady following his failure to help them win the Champions League in his first three seasons at the Allianz Stadium.

They also struggled to finish fourth on the log last campaign with many blaming the 36-year-old for not doing enough to propel the team to glory.