A fresh presidential campaign poster of Yahaya Bello, Governor of Kogi State, has emerged online.   The poster has Bello as presiden... 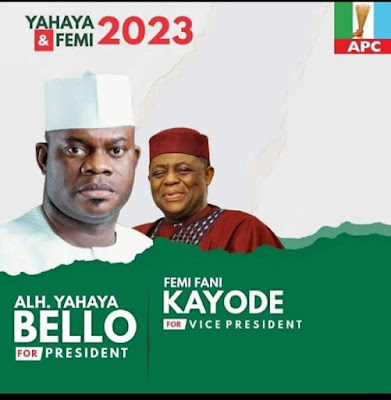 The poster has Bello as president and Femi Fani-Kayode, former Aviation Minister as his running mate.

It was observed that the campaign poster has the All Progressives Congress logo engraved on it.

The poster carried the message: “Yahaya and Femi 2023.”

Bello is believed to be nursing a presidential ambition.

His campaign posters had flooded some states including the Federal Capital Territory, FCT.

Amid claims, Bello is yet to declare his ambition to run for the presidency in 2023.

Fani-Kayode’s defection became public knowledge after he was presented to President Muhammadu Buhari by the Yobe State Governor, Mai Mala-Buni, at the State House.

Effort to reach Bello’s Chief Press Secretary failed as he was not picking his calls and did not respond to the text messages sent to him.