One time for the culture: BBNaija Maria goes traditional in bridal look inspiration

While most fans of the Shine Ya Eyes ex-housemate are used to her rocking English wears, not so many have seen her in traditional looks - until now.

The British/Nigerian belle rocked a green corset 'George' dress - a nod to the Igbo people of Nigeria. And in one look, bejewelled her hair and neck with coral beads.

For the second look, she replaced the jewellery on her hair - which was packed in a low bun - with a gele.

Maria may have left the Shine Ya Eyes house, but she certainly has no plans of diming her shine. Following her shocking eviction from Big Brother's house, the biracial beauty has been on media rounds, correcting her wrongs, clearing the air, and preparing for the life of fame.

As is the case with many reality stars, Maria isn't playing with her looks, especially when it comes to social media where the bulk of their fame often lies.

The reality star has been serving major fashion looks via her Instagram page - two of which have stood out.

Jumoke Adedoyin who is popularly known as JMK, has been serving major looks since her exit from the Shine Ya Eyes house.

The curvaceous reality star, whilst in the show, never missed an opportunity to put her curves on display and her sense of style unarguably earned her the admiration of a lot of viewers.

Well, she is out of the show and still giving fans reasons to be in awe. 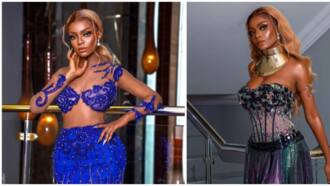 BBNaija Peace glammed up for her 27th birthday in elegant ensembles

Sunday live eviction shows are often highly anticipated by BBNaija fans and it has as much to do with who gets kicked out as it does with the host, Ebuka's fashion.

As expected, Ebuka left fashion enthusiasts in awe when he popped up on our screens in a healthy dose of colours that are - for lack of a better word - pure goals.