E be like tattoo competition: Hilarious reactions as Davido finally links up with Seun Kuti

Popular Nigerian singer, Davido is known to link up with quite a number of people in the industry and his recent stop was Seun Kuti's.

Kuti took to his Instagram page with a photo of a shirtless Davido who posed beside him like a boxer.

Despite the fact that Kuti had a shirt on, he left it open as he also made a fist, the display of stomach and chest flaunted the young men's numerous tattoos.

Kuti, in the caption, expressed pleasure at finally meeting Davido and jokingly noted that out of the N30BG in Davido's nickname, he has already been promised N1bn.

The singer also noted that he needs to go out more.

"Una two look alike o. With the head shape and the tattoos."

"Two of my favourite people." 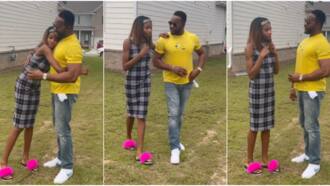 "Which kind belle be that David?"

Seun Kuti and wife get freaky in steamy photos

Singer Seun Kuti and his wife, Yeide, do not hold back when it comes to displaying affection for each other in public or on social media.

The celebrity chef teased her Instagram followers with some steamy bedroom pictures of her and Seun.

The couple appeared to have been spending private time away from their kid and they had quite an interesting time together.