Jackie B talks about her son and family, says men in the house weren't drawn to her just for her body

One name that was on the lips of a lot of the Big Brother Naija season 6 male housemates was Jackie B, and she has attributed it to her calm and collected personality.

In an exclusive interview with Legit.ng, the mum of one opened up on her life, background and why she chose to go and fight for the N90m grand prize. 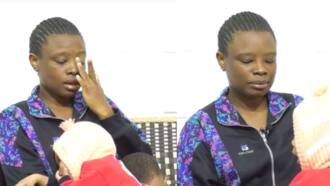 Married mother of three returns from Saudi Arabia after 7 years with 2 kids from different men, speaks in clip

The reality star revealed that she was not born with a silver spoon. According to her, they were not poor but her mum made sure they had what they needed.

The mum of one also noted that there were days where they didn't have food, she and her sister had to sell mangoes just to get by.

Jackie B and the men

On what she did to get the attention of almost all the men in the Shine Ya Eye house, Jackie B didn't have a definite answer but noted that whatever it was was beyond her voluptuous figure.

The 29 year old also said that she was shocked to find out that most of the guys were drawn to her and it wasn't for shallow reasons.

According to her, Whitemoney told her how he analyzes people but found it hard to unravel her till her exit from the show. I was so worried that she was not going to love me: Gabrielle Union shares her surrogacy story

Daughter of a senator

Jackie B is the daughter of Nigerian senator, Grace Folashade Bent, who works very hard and her kids are benefitting from her position.

Jackie B noted that her mum has her life to live and she also has her own to live and would love to have a name her son can benefit from.

The reality star further said that her journey to BBNaija was not an instant decision and she knew that she needed to use the platform.

Jackie B's love for adventure and experience pushed her to the show which despite how scary it was, was exciting and she obviously needed the money.

Jackie B and her son

When Jackie B mentioned that her 9 year old son watches the show, she got dragged by Nigerians and she explained that since she became a mum she has been conscious of her actions. 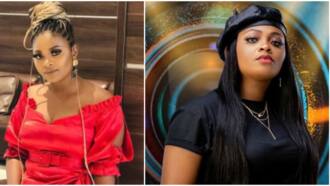 We made up: BBNaija's Tega talks about relationship with hubby, says she would have won the show

According to her, she is living her life for her son unapologetically and she just didn't want to do anything that would offend or affect her son in any way.

Jackie B and Michael go on date outside the house

Former BBNaija Shine Ya Eyes housemates, Michael and Jackie B did not let their romance end in the house as they decided to take it outside.

Michael shared what looked like a side view of Jackie B on his verified Instagram story and fans guesses were right when another video of Jackie B emerged.

Jackie also posted a short video on her Insta story all dressed for a night out, captioning it 'the night is young' with the lyrics of one of Tiwa Savage's popular songs, Somebody's Son playing in the background.