Woman who once worked as housegirl succeeds in life, bags degree, gets better job

A woman has gone on LinkedIn to narrate how she rose from grass to grace over the years. Jean revealed that she once worked as a maid.

Eight years after that time in her life, the woman got her degree In managing occupational health and safety and also diploma in management

Aside from those qualifications, she also got is also studying for her MBA. Jean said “working hard has never been an option.”

The lady revealed that her story has been marked by many kinds of emotions as she described hers as a “rich story”. Nigerian man gets big job at Google, company employs him as its engineer, many congratulate him

Jean stood dressed in a helmet at a place that looks like a project site. Her story inspired many people online.

Legit.ng compiled some of the reactions from people:

"Love this the sky is the limit my sista."

"This is awesome. Inspiring my dear. Keep the ball rolling."

Meanwhile, Legit.ng earlier reported that a lady, Souadou Niang, who started out in life as a toilet cleaner is now the owner of a five-star hotel that has 60 people working for her.

The woman said that she was born and raised in Dakar, Senegal. At the age of 18, she moved to America where she worked and studied. 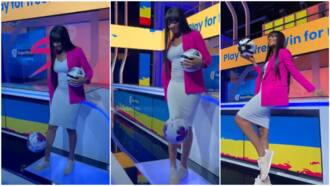 Young lady juggles ball with her leg more than 40 times like a pro in viral video, many people react

While in Washington, the lady walked past a mall she could not resist. She went inside the beautiful building and asked if there was a job vacancy.

The lady who started in a company as a cleaner said that her ambition was to be a part of the management.