The General Superintendent of Deeper Christian Life Ministry, Pastor William Kumuyi, has urged the Federal Government to tread with caution ... 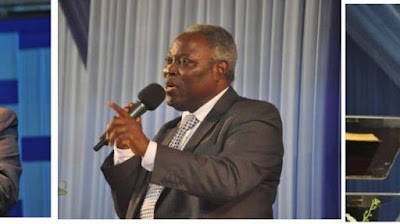 The General Superintendent of Deeper Christian Life Ministry, Pastor William Kumuyi, has urged the Federal Government to tread with caution on the issue of repentant terrorists.

No fewer than 8,000 suspected terrorists have surrendered to troops in the last few months, but Kumuyi advised that the sincerity of those who surrendered should be affirmed.

He spoke on Wednesday while arriving in Abuja for a five-day crusade with the theme, ‘Divine Solution Global,’ slated for Friday.

“The government should approach the issue with carefulness in order to restore peace in the country. Because of the past experiences, the government will have to look at the situation, look at real surrender and sincerity, and as we think about that together, it is a two-way programme, which is like having the carrot and the stick; but sometimes, we have to approach the carrot method so that there can be peace.

Also, commenting on resident doctors’ strike, he called for a middle ground between the government and the striking doctors.

“I believe that, as we follow the issues, they are trying to resolve everything. I think as we have conflict, the solution is not attacking each other and finding fault, but finding a middle ground.

“Whether we hold a dialogue or negotiate, I believe that we are about seeing the end of the tunnel,” the church leader said.

Kumuyi also said that Nigeria will experience real independence from attacks, oppression and torture as it celebrates this year’s Independence on 1st October.

“I believe that as we move to the next phase as a country and as individuals and family together, I believe that we are going to have real freedom and solution for every problem,” he added.